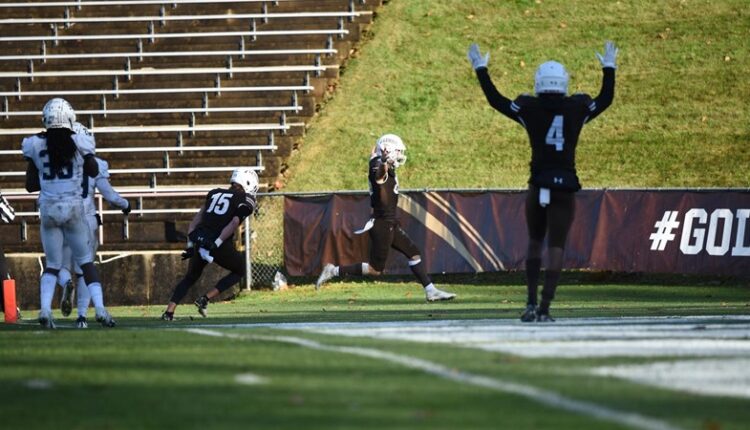 BETHLEHEM, Pa. – Battling through wet, windy conditions for most of the afternoon, the Lehigh football team picked up its second straight victory, defeating Georgetown 23-9 Saturday on Salute to Service Day at Goodman Stadium, presented by Weis Markets. Sophomore quarterback Dante Perri threw for 259 yards and two touchdowns to lead the offense, while the defense allowed just 237 yards.

Senior Pete Haffner led the defensive charge with 10 tackles, 2.5 tackles for loss, and a sack as Lehigh improves to 2-8 overall and 2-3 in Patriot League play. Georgetown falls to 2-7 overall and finishes league play at 1-5.

“We had some moments in the first half that we had to overcome,” Lehigh head coach Tom Gilmore said. The one that this team is starting to show more and more of is that grit that we’ve talked about, something that we preach all the time. To overcome some of those mistakes and shortcomings in the first half and get it done in the second half was really good to see.”

Junior Jalen Burbage set career highs with eight receptions for 86 yards. He also opened the game with a 62 yard kickoff return, but a Lehigh fumble near the goal line kept the Mountain Hawks from taking an early lead.

The Mountain Hawks turned the ball over on downs on their second drive of the game, but finally broke through with a 13-play, 70-yard drive on their next possession. A 23 yard field goal by junior Dylan Van Dusen gave Lehigh a 3-0 lead with 5:37 left in the opening half.

On Lehigh’s next possession, Perri engineered the Mountain Hawks’ first touchdown drive of the game. He connected with Burbage on plays of 14, 18 and 11 yards and then hit sophomore Roemello Miner, who scooted down the left sideline for a 34 yard touchdown, giving Lehigh a 10-0 lead at halftime.

— Lehigh Football (@LehighFootball) November 13, 2021 “He’s getting more and more comfortable and confident,” Gilmore said of Perri. “He’s displaying a lot of poise, just in the little things. Throwing balls away when you’re supposed to throw them away and taking what’s there. He’s really doing a lot of good things, running the offense really well. The guys certainly have a lot of confidence in him.”

Georgetown opened the second half with an impressive 13-play, 69-yard drive and got on the board on a four yard touchdown pass from Joseph Brunell to Joshua Tomas to make it 10-7 with just over eight minutes remaining in the third quarter.

Lehigh answered with a 14 play drive of his own and built his lead back to six at 13-7 on a 28 yard Van Dusen field goal.

The Hoyas climbed within 13-9 early in the fourth quarter as a bad snap on a Lehigh punt led to a safety, but the Lehigh defense dug in to force a 3-and-out, keyed by a sack and forced fumble by junior Mikhari Sibblis. Georgetown recovered the fumble but had to punt the football away.

“A lot of things worked well,” Gilmore said of the overall defensive effort. “We played very aggressively, except early the first drive, I think we were a little bit too tentative. We were playing off too many things and we gave up some yardage, but once we started playing more aggressively, we did a lot of good things.

“They came out with a whole different package to start the second half,” Gilmore continued. “Kudos to their coaching staff. We were prepared for it, but they came out and executed it anyway. Once we made a couple adjustments and reminded our guys what they were doing, we were able to shut them down and they weren’t able to come back and use it too much after the second drive of the second half.”

Lehigh capitalized on the short field and extended its lead back to seven points at 16-9 as Van Dusen connected on his career-high third field goal of the day, this one from 37 yards. Following another 3-and-out by the defense, Perri moved the Mountain Hawks down the field and cashed in with his second touchdown pass of the day, an 11-yarder to junior Johnny Foley to put Lehigh up 23-9.

Defensively, Lehigh held Georgetown to 33 rushing yards and recorded three sacks. Brunell completed 23-of-38 for 204 yards and a touchdown. Asante Das was the top target with seven catches for 51 yards.

The Mountain Hawks will host Lafayette next Saturday in the 157th meeting of college football’s most-played rivalry, presented by Lehigh Valley Health Network and Coordinated Health. Game time is set for noon from Goodman Stadium. Tickets are still available and can be purchased at LehighTickets.com or by calling 610-7LU-GAME during business hours.

EXTRA POINTS… Lehigh is now 19-1 against Georgetown since the Hoyas joined the Patriot League in 2001 and 10-0 against the Hoyas at Goodman Stadium… the Mountain Hawks won their game prior to the Lafayette game for the first time since 2017… Lehigh has held its last four opponents to an average of just 53 rushing yards per game… turnovers were even with each team losing one fumble on the afternoon… Lehigh had a 24-16 edge in first downs and a 33-27 minute advantage in time of possession… Van Dusen is the first Lehigh kicker to make three field goals and exceed 10 kicking points since Austin Henning kicked three field goals and added an extra point against Lafayette in 2019.

Here’s how broken Washington is: Democrats agreeing with each other is big news | John L. Micek

Democrats in Congress, including Pa. press Biden to extend pause on student loans