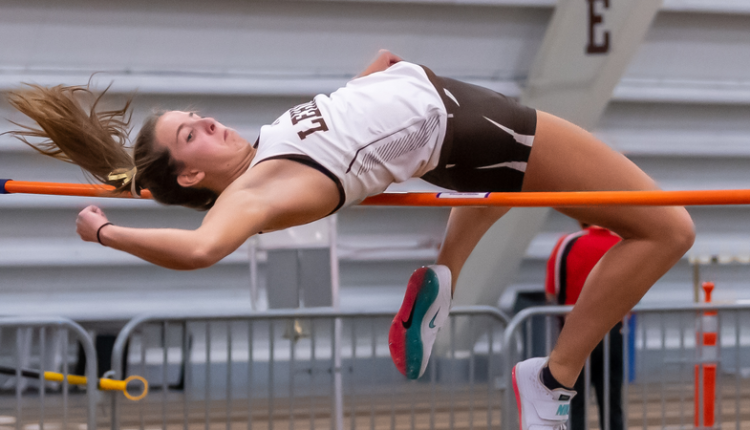 BETHLEHEM, Pa. – The Lehigh women’s track and field team showed no signs of rust in its first meet in over a month, defeating Sacred Heart 70-29 at the Angry Birds Invitational on Saturday afternoon in Rauch Fieldhouse. The Mountain Hawks completed the day with 13 first-place finishes.

“Winter break is great for the student-athletes emotionally but it’s hard for them to sometimes continue engaging in their training because they really need a break from everything and taking a break as a runner is not something we can just easily do but most of them did the best that they could,” said head coach Khayla Atte.

“I think if people are disappointed in their performances, to me that’s good because that says to me, ‘You have more and you can do better’ but the reality is we put two weeks of work into one week and then said ‘now go compete’ so if you did your best after that, I question how much effort you put into practice.”

“Kerry Perna works extremely hard,” Atte said. “I think if there’s an example of someone who is relentless about ‘give me more,’ it’s Kerry. “In the beginning of indoor, she came and said ‘hey I need more speed workouts. Can I do something with fitness? Can you help me with my nutrition?’

“She’s been relentless because she set these goals and she’s always bought into what we’re saying to her and always efforting and this is the pay off,” Atte continued. “I know Kerry has way more in her so her height is not reflective of her ability but this should be good momentum for the next step.”

Coming off of her school record breaking performance just a month ago, first-year Laura Reigle showed no signs of slowing down as she earned her second collegiate win. Reigle finished first overall in the pole vault with a mark of 3.65m. Sophomore Randi Conroy followed suit, finishing second with a mark of 3.65m.

While Lehigh found success in the field events, the Mountain Hawks dominated on the track, finishing first in all nine events.

Graduate student Martina Sell earned Lehigh’s first win on the track. Sell ​​finished first in the 5000m with a time of 18:46.56. Senior Allison Duane ran alongside Sell, finishing third with a time of 18:57.07.

Lehigh’s middle distance and distance runners continued to dominate on the track as they earned first and second-place finishes in the mile, 800m and 3000m. In the mile, sophomore Maddison Hayes earned the win for the Mountain Hawks, finishing with a personal best of 5:14.38. Junior Grace Kolbe finished second overall with a personal best of 5:24.50.

Sophomore Savanah Beavers won the final distance event for Lehigh, finishing first in the 3000m with a new personal best of 10:21.29. Senior Andrea Miller finished close behind Beavers, finishing second overall with a time of 10:30.03.

The Mountain Hawks’ sprinters continued Lehigh’s dominance on the track as they claimed first-place finishes in all five events. Ashley Griesmeyer earned the sprinters’ first first-place victory of the day. The senior won her first collegiate race in the 60m hurdles with a time of 9.07.

Lehigh’s first-years showed no signs of nerves in their second collegiate meet, winning both the 400m and 60m. In the 400m, first-year Grace Kennedy earned her first collegiate win, finishing the race with a time of 59.43. Graduate student Lauren Powell (1:01.69) finished second overall while sophomore Stephanie Webb (1:02.37) finished third.

In the 60m, Gianna Mangili claimed her second collegiate victory. The first year finished the race with a time of 7.89. Junior Ashley Struck followed suit, finishing second with a time of 7.94. Struck went on to earn a first-place finish of her own, winning the 200m with a time of 25.75. Kennedy (26.60) finished second while Mangili (26.73) finished third.

Lehigh wrapped up the one-day meet with a convincing win in the 4×400 relay. Webb, Powell and Struck, alongside sophomore Shelby Dejana, won the final race of the day with a time of 4:05.14.

“Coach Todd had a really great point last night,” said Atte. “He talked about how a dual meet scenario changes how you compete and how you always have to think about beating the person next to you and that forces you to be more competitive and outside of yourself.

“In track we’re very in our lane and focused on what we’re looking at and when there’s only one other person in a different uniform it changes how you operate” continued Atte. “I saw a competitiveness that was different today which is good.”

The Mountain Hawks will have a busy weekend ahead of them next week as they prepare for two meets. While some members of the team will travel to Staten Island, NY for the Villanova Invitational, others will remain in Bethlehem for the Moravian Indoor Meet, which will be hosted by Moravian inside Rauch Fieldhouse.

Military bases are a big contributor to environmental racism in southeastern Pa. | Opinion