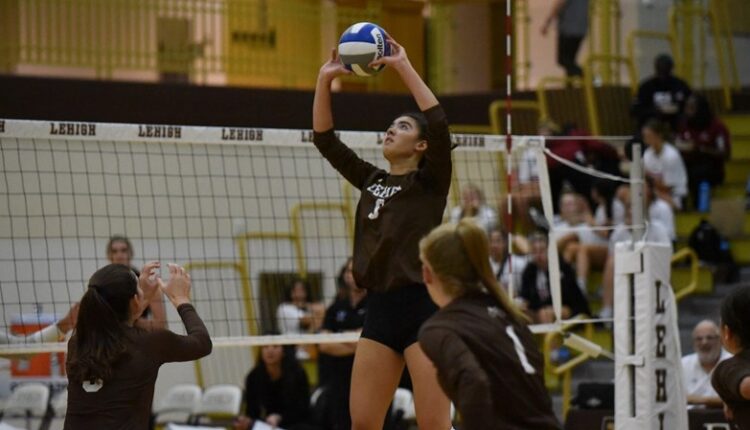 HANOVER, NH – The Lehigh volleyball team closed out the Dartmouth Invitational with an impressive 3-0 sweep of Merrimack Saturday at Leede Arena. For the second time in three matches at Dartmouth, Lehigh limited his opponent to a negative attach percentage. Lehigh hit .329 while holding the Warriors to a -.056 clip.

“Overall the weekend offered up lots of successes and several learning opportunities,” said head coach Alexa Keckler. “As we continue to compete, we grow in confidence while figuring out areas of our game that must be improved upon as we head into league play next weekend. The team is looking forward to getting back in they gym this week and working on making progress and improving our consistency!”

“We are certainly proud of Makena and the setter she is becoming,” Keckler said. “Reaching 1000 assists is just the beginning for her. She has been doing an excellent job of running the offense and working to create stronger consistency and chemistry with all her attackers.”

Lehigh and Merrimack (2-5) traded the lead in set one before the Mountain Hawks pulled away late. A kill by Schulte sparked a 9-2 run to turn an 18-16 deficit into a 25-20 set win. Sophomore Emily Stewart capped the set with a service ace.

Lehigh held a comfortable lead throughout most of the third set, going up by as many as nine points. A 5-0 run brought Merrimack within 22-19 but Lehigh captured three of the final four points, closing out the match with a kill by first-year Dakota Hartman and a block by junior Alina Smith.

The Mountain Hawks will host Fairleigh Dickinson on Tuesday at 7 pm before kicking off the Patriot League slate next weekend with matches Friday at Lafayette and Saturday at Bucknell.

Topsoil protection should be stressed in the next farm bill, U.S. House Ag panel told