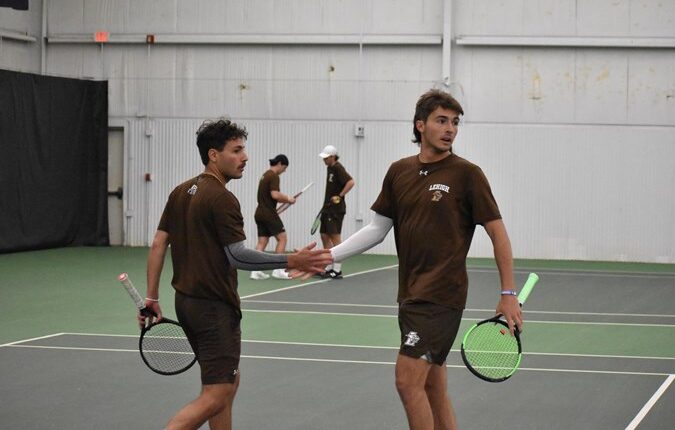 BETHLEHEM, Pa. – The Mountain Hawks picked up their fourth consecutive win on Sunday morning, defeating Boston University 4-0. The Lehigh men’s tennis team earned its 11th win of the season and improved to 6-1 in league play after honoring seniors Zack Elliott and Gary Fishkin on Senior Day.

“I was really impressed with how we played,” said head coach Wouter Hendrix. “The guys showed a lot of poise and discipline and they kept their composure really well. Boston University is a very good team and we’re very happy with the win. I just want to thank our seniors because this one was for them, it’s their last home match and it’s been just an incredible journey with them and I just feel so privileged to have coached them for four years.

The Mountain Hawks clinched the double point for the fourth straight match to secure the 1-0 lead going into singles play. Junior Jeremy Learner and first-year Marc Blekhman won the first doubles match of the day for Lehigh. The duo defeated Dion Loutas and Jonah Dickson 6-3 at the No. 2 spot.

Juniors Michael Bukhalo and Matt Kleiman clinched the doubles point for Lehigh at the No. 3 spot. The duo defeated Boston University’s Ben Letzer and Gabe Brown to secure their fifth doubles win of the season.

The Mountain Hawks showed no signs of slowing down going into singles play. Lehigh won the first three singles matches to clinch their sixth league win of the season. Senior Zack Elliott started Lehigh off, securing his 12th win of the season at the No. 1 spot. Elliott defeated Jonah Dickson of Boston University 6-2, 6-1.

“It gives us a lot of confidence going into the next couple of weeks with Bucknell and the Patriot League Tournament,” said Blekhman. “We beat Army two days ago which was another great win so we’re going to continue to learn, improve and find stuff we can work on in practice and just take it methodically so that we can just keep working and get better but it’s a really good start for us. We’re feeling great as a team overall.”

The Mountain Hawks will travel to Lewisburg, Pa. on Saturday April 23 to take on Bucknell in their final match of the regular season. The match will begin at 2 p.m