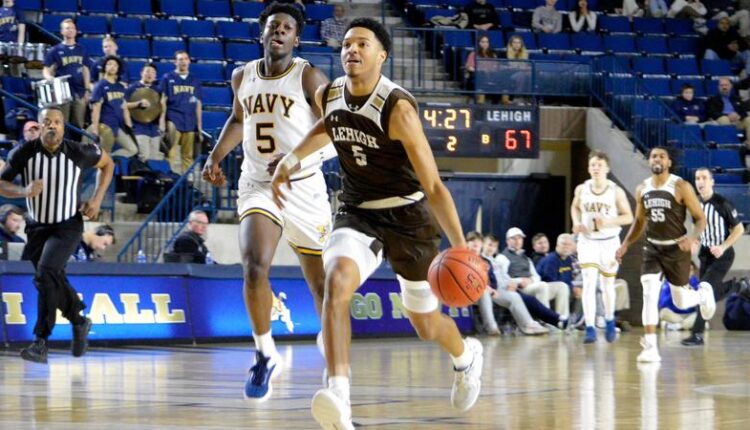 ANNAPOLIS, Md. – The Lehigh men’s basketball squad used a collective effort to earn their second Patriot League victory with a 78-73 win over Navy on the road inside Alumni Hall on Sunday afternoon.

The Mountain Hawks (7-8, 2-2 PL) record their second league win of the season and won back-to-back games while Navy (8-8, 1-3 PL) has dropped its last three contests and its second Straight loss at home. This Lehigh victory marks its third straight win over the Midshipmen as the Mountain Hawks won at Alumni Hall for the second straight season.

Navy opened the contest with a 4-0 lead before Lehigh’s senior Evan Taylor hit his first trey of the game. Taylor drained his second three-pointer to give the Mountain Hawks their first lead of the contest with 16:32 remaining. Lehigh took his largest lead of the half when junior JT Tan contributed a basket to put the Brown and White ahead by ten, 32-22 with seven minutes to play. The Midshipmen clawed their way back with 10 straight points to tie the game at 32-32 with 3:11 on the clock. Sophomore Keith Higgins Jr. knocked down a three-pointer with 50 seconds in the half to put Lehigh up 38-36, but Navy’s Daniel Deaver countered with one of his own to give the Midshipmen a 39-38 lead heading into halftime.

Like a good teammate, JT is there. JT Tan is in the right spot for the tip-in. Lehigh leads Navy 30-22 with 7:57 to play in the first half. #GoLehigh

The second half saw the Midshipmen and Mountain Hawks exchange baskets and Navy went ahead by six points, 60-54, with 10:48 to play. Navy extended its advantage to seven points on two occasions, the last at 70-63, but Lehigh managed to tie things up at 73-73 off a Higgins Jr. jumper and forced Navy to call a timeout with 1:50 remaining in the half .

A massive defensive stand from first-year Henri Adiassa, who blocked his second shot of the game, helped Lehigh get the ball back. Off an inbound play, Taylor drove into the paint and knocked down a jumper to put the Mountain Hawks in front for good. Higgins Jr. closed the game out by sinking multiple free throws to seal the game for Lehigh, taking down Navy 78-73.

Taylor scored 26 points, which matches his career-high, and brought down eight rebounds to lead the Mountain Hawks to the victory. Taylor scored 13 points in each half and finished the day shooting 69 percent (11-of-16 from the field and knocked down four three-pointers. He has scored at least 20 points in back-to-back games for Lehigh and the 11th 20-point performance in his career.

BLOCK AND TREY! Parolin makes a block on defense which leads to ANOTHER Taylor 3-pointer! #PLTop3 #GoLehigh

Higgins Jr. scored 10 of his 16 points in the second half, including sinking clutch free throws to extend Lehigh’s lead at the end of the game. He shot 40 percent from the field, including his three three-pointers and went 5-for-7 at the free-throw line to go with one steal and one assist. Also reaching double-figures in the game was junior JT Tan, who went 4-for-6 from the floor and made both free throws he attempted. Tan also grabbed three boards and had one assist.

Sophomore Tyler Whitney-Sidney contributed nine points, seven boards, two assists and two steals for the Mountain Hawks while junior Jalin Sinclair dished out a team-high five assists and two points at the free-throw line. Sophomore Ben Knostman tossed in three points and was credited with two assists while making his first start of the year while Adiassa grabbed three rebounds and led the team with two blocks.

The find and the finish!
Sinclair leads Parolin into the lane where he draws the foul and converts the basket. #GoLehigh

Navy had two Midshipmen finish in double-figures, both scoring over 20 points. Daniel Deaver scored 23 points, shooting 50 percent (9-for-18) and was one of three midshipmen to bring down seven rebounds. Sean Yoder tossed in 22 points and was 8-for-12 (75 percent) from the field and knocked down four of Navy’s three-pointers and also brought down seven boards.

Lehigh committed just nine turnovers that Navy turned into 11 points while the Midshipmen were forced into 12 miscues that the Mountain Hawks turned into 10 points. The Brown and White were out-rebounded 36-34 but still managed to score more points in the paint, 34-32.

“It was our resolve and toughness that you don’t see on the stat sheet that contributed to this victory. Their mindset and mentality to continue to push, elevated us to the win” concluded Reed.

The Mountain Hawks return home on Wednesday, Jan. 11 when Lehigh welcomes Holy Cross to Stabler Arena with tip-off set for 7 pm Tickets can be purchased at LehighTickets.com or at Stabler Arena on Wednesday prior to tip-off.

Pooler taco stop named one of the best in the country