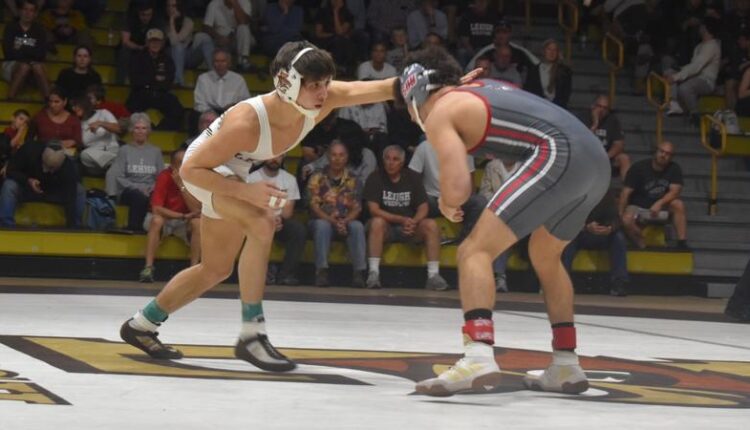 BETHLEHEM, Pa. – No. 17 Lehigh secured a 2-0 opening weekend of dual action with a 44-0 shutout of Sacred Heart Sunday afternoon inside Leeman-Turner Arena or Grace Hall. The Mountain Hawks won all 10 bouts, securing bonus points in nine of the wins. Lehigh held a 37-0 edge in takedowns and did not allow an offensive point on the way to its first shutout since a 46-0 blanking of LIU on Jan. 31, 2021.

“We didn’t know what to expect coming in since we haven’t seen a lot of their guys on film,” Lehigh head coach Pat Santoro said. “They’re still building their program so we just wanted to see our guys go out and score as many points as possible and they did that today.”

The dual began at 133 with sophomore Connor McGonagle defeating Andrew Fallon 4-1 behind a second period takedown and 2:25 of riding time advantage. It was the only bout of the dual that didn’t produce bonus points.

Sophomore Malyke Hines followed with an 11-0 major decision over Seth Brown at 141. Hines scored a takedown and two point near fall in each of the first two periods and added a third period reversal and more than four minutes of advantage time.

At 149, sophomore Max Brignola delivered the first of two technical falls, defeating Matt Laurie 18-3 in a match that ended in 5:00.

“There’s no substitute for experience and Max is always trying to learn,” Santoro said. “He’s hitting different things this year than he was a year ago. Every day in the room, he’s trying something new. And, he has a seven minute gas tank. Those things will bode well for him.”

Nine of Lehigh’s 37 takedowns came from sophomore Michael Beard, who dominated Nick Copley in his Grace Hall debut with a 22-7 technical fall in 4:15.

Lots of bonuses, baby! as the Mountain Hawks capped a 2-0 opening weekend with a shutout of Sacred Heart. pic.twitter.com/or4EsEh2bh

Junior Elijah Jones made his second career dual meet appearance and his first at 285 and came away with his first career dual victory and Lehigh’s only fall of the day. Jones scored an early takedown on Marc Berisha then locked up a cradle to secure the pin in 1:26.

First-year Carter Bailey capped the shutout with an 18-1 technical fall victory over Mikey Manta at 125. Bailey scored a four point near fall to end the bout at 6:04.

There was one extra bout Sunday, with senior Mike Sisselberger, an All-America faceoff specialist for Lehigh’s men’s lacrosse team, wrestling at 197 against Aladeen Hussein. Sisselberger scored a takedown in each period on the way to a 9-4 decision.

“It was a good weekend, but there are a lot of things we did this weekend that we won’t get away with next weekend,” Santoro said. “We have some things to work on. It will be a short week for us but we’ll see what we can do.”

The Mountain Hawks will wrestle two duals in Bethlehem next Saturday. First, Lehigh welcomes No. 10 Oklahoma State to Leeman-Turner Arena at Grace Hall for a noon match. Then, the Mountain Hawks will head to Liberty High School to face Oklahoma at 3 pm as part of Journeymen WrangleMania. Tickets to the Oklahoma State match can be purchased at LehighTickets.com or by calling 610-7LU-GAME during business hours.

Pa.’s long-running row over undated ballots is back in federal court as Election Day nears