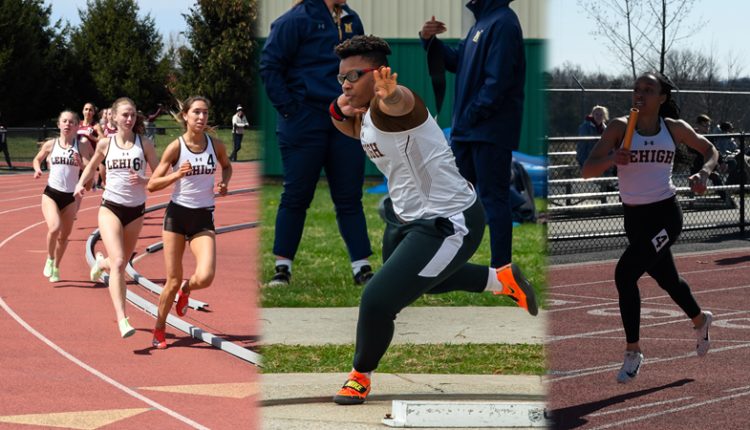 BETHLEHEM, Pa. – The Lehigh women’s track and field team wrapped up its final weekend of the regular season at the Penn Relays and the Carol and John Covert Classic on Friday and Saturday. The Mountain Hawks showed no signs of slowing down as the outdoor season wrapped up, breaking two school records and finishing with more than 17 personal records.

Lehigh’s seniors put on solid performances in their final home meet as Mountain Hawks and were rewarded with school records, personal records and a small ceremony following the meet at Goodman Track and Field Complex.

“Some of the seniors are phenomenal athletes and some of them are phenomenal teammates but all of them have displayed an astounding work ethic and astounding ability to persevere and stay with their goals and their aspirations,” said head coach Matt Utesch. “I think in this day and age there’s a lot of people who give up and fail on that and there’s a whole bunch of people around telling them ‘That’s okay to do that’ and these kids don’t do that. They stick with it , they work hard and they continue to do it day after day, year after year and I’m really proud of them for doing it.”

Senior Camari Griffin finished her Senior Day weekend with solid performances. Griffin was a member of the 4×100 relay team who not only competed at the Penn Relays but broke a school record as well. The senior ran alongside sophomore Ashley Struck and first-years Melissa Cunningham and Stephanie Webb in the relay. The squad not only broke a school record but finished first in their heat at the prestigious meet with a time of 46.95.

On top of her 4×100 relay school record, Cunningham grabbed a personal school record of her own on Saturday in Bethlehem. The first-year won the 200m, finishing with a new school and personal record of 24.44.

Senior Teasha McKoy became one step closer to a school record of her own on Saturday at the Goodman Track and Field Complex. McKoy finished second in the shot put with a new personal record of 14.08m, bettering her mark to remain third all-time. On top of a new personal record, the senior went on to win both the hammer (50.00m) and discus (46.11m).

Fellow senior Veronica Meyer also found success in her Senior Day weekend for Lehigh. Meyer won the javelin with a throw of 40.08m and was inches away from earning a personal record of her own.

The Mountain Hawks continued to put up solid marks in the field events in Bethlehem on Saturday. In the throws, junior Emma Harrington and first-year Giuliana Bottino both recorded personal records in the discus. Harrington finished fourth with a mark of 40.02m while Bottino finished with a mark of 33.89m.

In the shot put, first-year Chelsi Chevannes earned a new personal record of 10.33m. Chevannes also earned a PR in the long jump (5.19m) and 100m hurdles (15.94). Junior Avery Roze also finished the long jump with a PR of her own. Roze finished third with a mark of 5.40m.

While the Mountain Hawks were able to put up solid marks in the field events, they also put up impressive times on the track, finishing with ten PRs.

Lehigh’s middle distance and distance runners continued to take seconds off their times and finish with more personal records. In the 800m, the Mountain Hawks swept the podium with junior Elena Perez-Segnini winning with a PR of 2:13.85. Sophomore Christine Yakaboski (2:14.52) and senior Natalie Condon (2:16.46) finished second and third, respectively. First-year Riley Morrell also finished the race with a personal record of her own (2:21.92).

The 4×400 relay team also had a solid performance in Philadelphia on Friday. Griffin, Struck, graduate student Kaja Skerlj and sophomore Jordyn Hock ran the race in 3:52.70 to become fifth all-time.

“The thing about our seniors is, if they run cross country and indoor track and outdoor track, they’re in season all year long so this is not any kind of marginal commitment,” said Utesch. “We’re asking these kids to go to the well sometimes three times a year and always twice a year and to make it through these four years is really an amazing accomplishment.”

The Mountain Hawks will return to Annapolis, Md. for the second time this season next weekend for the much anticipated outdoor Patriot League Championships. Action will begin Friday May 6 and will wrap up on Saturday May 7.

The New MADD Movement: Parents Rise Up Against Drug Deaths

Pennsylvania, the birthplace of democracy, could elect an insurrectionist governor | Dick Polman