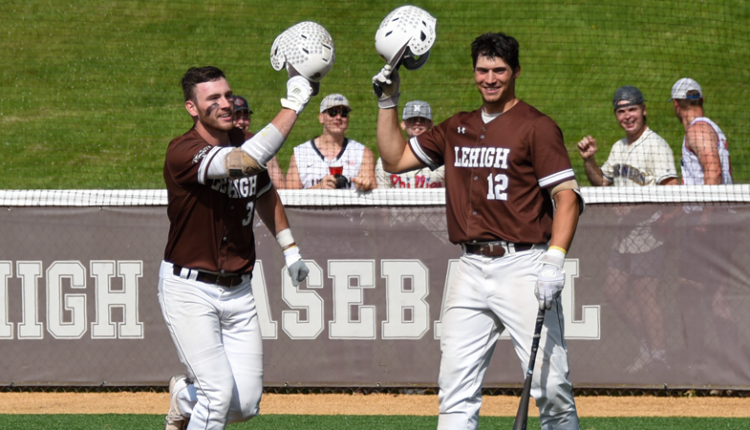 BETHLEHEM, Pa. – The last seven league games of the regular season are critical for the Lehigh baseball team, closing out the home slate this weekend with three games against Holy Cross at J. David Walker Field – a doubleheader Saturday and single game Sunday – both beginning at noon . Saturday’s doubleheader is Senior Day as the program will honor seven members of the senior class and both games will be streamed live on ESPN+ (subscription required).

The Mountain Hawks (21-19, 8-10 PL) play five of their last seven games against the Crusaders to conclude the year, still searching for a spot in the Patriot League Tournament for the second consecutive season.

Lehigh is coming off a season series victory over Bucknell after topping the Bison in two out of three games last weekend in Lewisburg. The Mountain Hawks claimed a 9-4 mid-week victory over Cairn Thursday afternoon at Walker Field behind a two-hit performance out of the pitching staff with 13 hits for the offense.

Junior right-hander Will Grisack (1-2, 8.27 ERA) shoved three innings of relief with no hits and no runs allowed, striking out three with zero walks to earn his first win of the year against the Highlanders. Six pitchers combined to allow two hits, taking a no-hitter into the eighth inning.

Senior Casey Rother continues to be the catalyst of the Lehigh offense, pacing the team with a batting average of .348 in 40 games for the Mountain Hawks this year. He’s totaled 56 hits with 15 doubles, a triple and five home runs, driving in a total of 33 runs. Young (.339), sophomore Riley Davis (.330) and senior Joe Gorla (.328) are all hitting above .300 this season to lead the offense.

Lehigh’s offense has combined to a total of 38 home runs as a team this season, the most in the Patriot League. The number is led by junior Adam Retzbach’s Patriot League-leading eight long balls this season, a career high total for the catcher. Retzbach also drove in a team-high 39 runs with 40 hits in 40 games.

On the mound, senior left-hander Luke Rettig (7-2, 2.14) has been phenomenal all season long and continues to lead the rotation, searching for his eighth victory of the season on Saturday. His eighth win would tie him with Joe Matteo in 2006 for the second-most wins in a single-season in program history. The program record holder is Dave Cerminaro in 2002 with nine. Rettig has struck out 57 batters with 25 walks. At 193 career strikeouts, he is just seven away from 200 for his career, which would make him just the fifth player in program history to reach the milestone and first since Matteo ’08.

Senior left-hander Matt Stamford (3-4, 5.51) has been efficient in starts as of late and will be an important piece to the puzzle in the rotation this weekend. Stamford struck out 36 with 19 walks in 49.0 innings, totaling nine starts. Junior right-hander Ben Christian (2-4, 5.31) has also seen success in the rotation with 23 strikeouts over 40.2 innings of work.

Holy Cross (13-32, 7-11 PL) has won two straight games including a weekend-ending win over Lafayette on Sunday and a 3-1 victory at Dartmouth Tuesday. The Crusaders took the weekend series over the Leopards by winning two out of three over the weekend.

First-year Nick Wang is a Patriot League Player of the Year candidate this season with his .376 batting average in 37 games, totaling 50 hits with 18 doubles, a triple and a home run. He’s also walked 25 times and reached base at a clip of .479. He is the only Crusader hitting above .300 this season with Sean Scanlon (.294) and Sam Kirkpatrick (.288) trailing closely behind.

The Crusaders hold a slim lead in the all-time series over Lehigh, 69-61. The Mountain Hawks took three of four from the Crusaders last year including a big victory at the end of the season in Worcester to clinch the Patriot League Regular Season title.