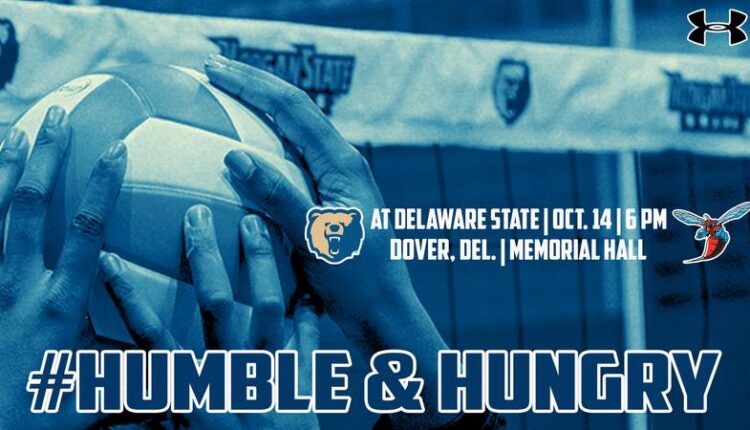 BALTIMORE, Md. (Oct. 11, 2022)–Morgan State will travel to Dover, Del. on Friday, Oct. 14 to take on the Delaware State Hornets in a Mid-Eastern Athletic Conference (MEAC) contest at 6 p.m. at Memorial Hall. The Lady Bears enter the contest on a three-match losing skid, while Delaware State is riding a three-match winning streak.

BEAR CLAWS: Morgan State (2-17, 1-4 MEAC) is coming off a 3-0 homecoming loss to Norfolk State on Sunday, Oct. 9. The loss ended a four-match homecoming winning streak for the Lady Bears. Makila Billingsley finished with seven kills, while Justyus Jackson and Jourdan Page each added six. Melanie Battle hit for a match-high .750, recording three kills on four attempts. Defensively, Alyssa Sampson had a match-high 10 digs and Page tallied six. Trinity Carruthers and Mackenzie Jefferson shared the duties at setter, and each had 11 assists and five digs.

HORNET STINGERS: Delaware State (14-4, 4-1 MEAC) is riding a three-match winning streak with all three of the wins coming on the road by way of 3-0 sweeps. The Hornets defeated South Carolina State in its last outing on Sunday, Oct. 9 in Orangeburg, S.C. Alondra Maldonado led the way with 10 kills, while Jasmal Cruz tallied a match-high 18 digs. Lacy Alayna had 15 assists and Malgorzat Andersohn added 13. Sydney Lewis recorded five combined blocks, including two solo to help Delaware State hold a 5-3 advantage in blocks. The Hornets would hit .424 as a team, while limiting S.C. State to .030 hitting for the match.

NEXT UP: Morgan State will return home on Sunday, Oct. 16 to close out the first half of the MEAC slate when it hosts Maryland Eastern Shore (MDES). First serve will be at 1 p.m. at Hill Field House. Morgan State and the Hawks meet last month in a non-conference contest at the George Mason Invitational (Sept. 16) in Fairfax, Va. The Lady Bears would defeat MDES in five sets to secure their first win of the season.

STILL PERFECT: Morgan State picked up its first MEAC win of the season, following a 3-0 defeat of visiting South Carolina State (9/25). The win was Morgan State’s 26th straight victory over the Lady Bulldogs in as many meetings. S.C. State is the lone MEAC opponent that Morgan State has never lost to in program history.

LET’S GO FIVE: Morgan State and North Carolina Central played five sets in the MEAC opener with the visiting Eagles defeating Morgan State 3-2. It was the second five-set contest this season for both teams. NCCU improved to 2-0 in five setters, while the Lady Bears fell to 1-1. Morgan’s first five-setter of the season was a 3-2 non-conference win over Maryland Eastern Shore (9/16) at the George Mason Invitational.

FINALLY: After 14 consecutive contests away from home to start the season, Morgan State finally played in front of the home fans for the first time in 2022, when it entertained North Carolina Central for its home opener on Friday, Sept. 23 at 3 pm at Hill Field House. The match was also the MEAC season opener both teams.

WON AND COUNTING: First-year Morgan State head coach Xiomara Ortiz picked up her first collegiate coaching victory and first win at Morgan State, following a 3-2 come-from-behind victory over Maryland Eastern Shore (9/16) in the opener of the George Mason Invitational. The victory also marked the first win of the season for the Lady Bears, who also ended a 15-match losing skid dating back to last season.

JACKSON NAMED TO GMU INVITATIONAL ALL-TOURNAMENT TEAM: Junior middle blocker Justyus Jackson was named to the George Mason Invitational All-Tournament Team (9/17). Jackson finished the weekend hitting .289, while averaging 1.5 kills and 1.3 digs per set in three matches. The Davenport, Iowa native totaled 17kills, 13 combined blocks, including five solo, one dig and a service ace. She began the week with a season-high 10 kills and a career-high seven blocks, including a solo in a five-set thriller against Maryland Eastern Shore to help the Lady Bears capture their first win of the season. Jackson finished the weekend hitting .444 with five kills, four blocks and collected her first service ace of the season in the finale against George Mason.

BLOCK PARTY: Freshman Jadyn Perkins totaled a season-high and match-best eight combined blocks, including a solo block against Radford (9/2) at the Towson Invitational. The Pittsburgh, Pa. native would total 11 blocks during the weekend, giving her 15 on the season, before suffering an injury. Justyus Jackson, who tallied a career-best seven blocks, including a solo in the win over Maryland Eastern Shore (9/16), has a team-high 43 blocks with 11 solos.

OPENING SERVE: Morgan State fell to 9-21 in season openers since the 1993 season, after falling in the season opener in three sets at Charlotte (8/26). The Lady Bears’ last opening day victory was a 3-2 win at home against Seton Hall in the opener of the Morgan/Towson Invitational (8/30/19).

ROAD WARRIORS: Morgan State began the season playing its first 14 contests, all of which are non-conference, away from Hill Field House. Morgan State didn’t play in front of the home crowd until Sept. 23 when it welcomes North Carolina Central for the MEAC and home opener.

ORTIZ TAKES OVER THE HELM: On May, 25, 2022, Xiomara Ortiz was announced as the new head coach of the Morgan State volleyball program. Ortiz, who became the seventh coach in program history, takes over for Ramona Riley-Bozier, who during her 34-year career captured nine MEAC regular season titles, four outright MEAC Tournament titles, guided the Lady Bears to three NCAA Tournament appearances, while becoming the school’s all-time winningest coach in any sport with 481 victories. Ortiz comes to Morgan after spending a year as the assistant coach at Shippensburg University during the 2021 season and the previous three seasons as an assistant coach at Lehigh University. A native of South Setauket, N.Y., Ortiz had a stellar four-year career as a libero at Binghamton University, where she set the school records for single-season digs (551) and career digs (1,925) in 116 matches played. As a freshman, she earned America East All-Rookie honors and was named to the All-America East Second Team as a sophomore. She was also a three-time member of the America East Honor Roll.

MORGAN PICKED SEVENTH IN MEAC: Morgan State was picked to finish seventh in the eight-team Mid-Eastern Athletic Conference (MEAC) preseason poll, as voted by the league’s head coaches and sports information directors. Last season the Lady Bears were picked to finish tied for fourth in the MEAC with Maryland Eastern Shore and ended up seventh.

COLEMAN NAMED ASSISTANT COACH: Maegan Coleman will enter her first season as an assistant coach at Morgan State for the 2022 season. Coleman comes to Morgan after spending the 2021 season as the head coach at Cheyney University. Prior to Cheyney, Coleman also had one-year stints at West Alabama and Lamar Community College. While at LCC, the team ranked 13th in the nation for block solos, 32nd in digs and 37th in service aces in 2019. A native of Lancaster, Texas, Coleman began her collegiate career at Tyler Junior College, before concluding her playing career at Prairie View A&M. She helped the Panthers win two Southwestern Athletic Conference Western Division titles. Coleman was awarded the Student-Athlete Academic Award three times, and was the first student-athlete from Prairie View A&M to earn a Nike Internship.

POSTSEASON EXPERIENCE: Morgan will face just two opponents this season (Towson and Howard), who reached the 2021 NCAA Volleyball Tournament. The Lady Bears will face the crosstown rival Towson Tigers on Sept. 4 at 1 p.m. in the finale of the Towson Invitational in Towson, Md. Morgan will square off against its MEAC rival, Howard twice this season on each other’s home floor. The two will first meet on Oct. 7 in Washington, D.C. and will conclude their regular season series on Oct. 28 in Baltimore for Morgan’s Dig Pink match.

LOOKING TO STAY UNBEATEN: Morgan State will look to add to its perfect record and remain unbeaten against fellow MEAC member South Carolina State. The Lady Bears enter this season with a 25-0 all-time record against the Lady Bulldogs. Morgan State and SC State will first meet on Sunday, Sept. 25 in Baltimore, before facing each other again on Sunday, Oct. 23 in Orangeburg, S.C.

TOURNAMENT EXPOSURE: The Lady Bears will take part in four regular season tournaments this year. Following the Charlotte Invitational (Aug. 26-27), Morgan State will make the short trip to Towson, Md. to compete in the Towson Invitational (Sept. 2-4) against Princeton, Radford, Rutgers and Towson. Next will be a trip to Ohio for the Cleveland State/Akron Invitational (Sept. 9-10). Morgan State will take on Valparaiso in the opener on Friday at 11 a.m. at the University of Akron and will meet co-host Cleveland State that evening at 6 p.m. the Lady Bears will travel back to Akron on Saturday to face the host Zips at 12 p.m. Morgan State will close out its non-conference slate in Fairfax, Va. for the George Mason Invitational (Sept. 16-17). MSU will meet fellow MEAC foe Maryland Eastern Shore on Friday at 4:30 p.m. The contest will not count toward the MEAC standings. The Lady Bears will close out the weekend with an 11 a.m. contest on Saturday against New Hampshire, before taking on host George Mason at 6 p.m. in the finale.

MORGAN EARNS THIRD STRAIGHT USMC/AVCA ACADEMIC AWARD: The Morgan volleyball program was honored as a recipient of the United States Marine Corps and the American Volleyball Coaches Association Team Academic Award for the 2021-22 academic year. The Lady Bears had a team GPA of 3.35. It marked the third consecutive year, as well as the third time in program history that Morgan State has earned the award. Last season Morgan posted a GPA of 3.62 and totaled a 3.48 GPA when it first earned the award for the 2019-20 academic year.

WELCOME TO THE CAVE: Morgan State welcomes the addition of two newcomers to the 2022 squad, one freshmen, Jaydn Perkins (Pittsburgh, Pa.) and one junior transfer in Mikah McIntosh (Miami, Fla.).

SAYING GOODBYE: Morgan State will say goodbye to its lone senior, Melanie Battle prior to its home finale ‘Senior Night’ match against rival Coppin State (11/11). The match will also be the Lady Bears’ regular season finale.


FOLLOW MORGAN STATE ATHLETICS IN CYBERSPACE
There are many ways to keep up with MSU athletics online and on the go:
• Visit www.morganstatebears.com, the official web site of Bears athletics, for news, schedules, stats, bios and more.
• Follow us on social media:
Facebook: /MorganStateBears
Twitter: @MorganStBears
Instagram: /MorganStateBears

ABOUT MORGAN
Morgan State University, founded in 1867, is a Carnegie-classified high research (R2) institution offering nearly 140 academic programs leading to degrees from the baccalaureate to the doctorate. As Maryland’s Preeminent Public Urban Research University, and the only university to have its entire campus designated as a National Treasure by the National Trust for Historic Preservation, Morgan serves a multiethnic and multiracial student body and seeks to ensure that the doors of higher education are opened as wide as possible to as many as possible. For more information about Morgan State University, visit www.morgan.edu.