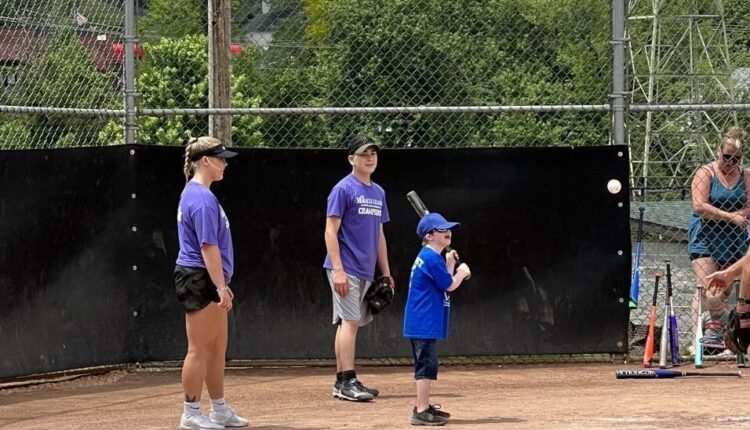 The Miracle League of Pennsylvania’s Laurel Highlands gives players with special needs the opportunity to do something many of them thought they could never do: Play ball.

“We accommodate all kinds of needs in order for them to participate and play the game so that they have fun and enjoy the greatest pastime,” said Christine Eckert, chairwoman of the Uniontown nonprofit.

The local branch of the national nonprofit has about 75 players registered annually, she said.

Players must be at least 3 years old, but there is no maximum age.

The season typically starts in mid-May, and players are divided into two teams with games on Sundays. Younger athletes play in the first game of the day, followed by the older players. The Miracle League typically has five or six game days per season.

“My son was special needs and when he was younger, we had a therapist that introduced us into this league,” she said. “Like many families, we never thought our son would be able to play in a baseball league because our son was in a wheelchair, he was nonverbal.”

Their son, Ian Paul Eckert, died in September at age 14. His older sister is an athlete, so it was important to Eckert and her husband that their son also had the chance to play sports.

“It was a huge excitement when we would get to go to the games,” she said.

“He just knew that he was there with a lot of friends and he was having fun. Everyone was upbeat and positive. Everything that brings him joy brings joy to us,” she said.

“We want a stress-free day. We want something for the players to just show up, forget their day-to-day struggles. They put those struggles aside and play the game. They cheer for each other, no matter what team they’re on. I’m inspired by them,” she said.

The league is structured so that family members are also able to put their worries aside.

“We try to encourage the families to come and just be the spectator. Don’t try to be the volunteer. Watch the game. We’ll make sure they’re safe. Just cheer from the sidelines, take pictures,” she said. “We want the families to have whatever that normal day is for them, to not worry about anything for that hour.”

Donations for the Miracle League go, in part, toward sending players and their families to the annual All-Star game. Ian Eckert was selected for the All-Star game trip last year.

“They are treated just like a VIP,” she said.

Eckert said some of the families require extensive cargo to keep their loved one safe and healthy, and the Miracle League pays for the travel accommodation that will be the most comfortable for them.

“They help families enjoy the time away, so they forget about some of the daily struggles that we go through,” she said. “They go all out for the players.”

“For all their hard work during the season, they get trophies and certificates and get to have fun and dance,” she said. “They love to dance.”

For more information or to donate, visit mlplh.org.

Alyssa Choiniere is a reporter for the Herald-Standard of Uniontown, Pa. Helping the Helpers is a joint effort of the Uniontown Herald-Standard and the . Readers may email him at  [email protected].