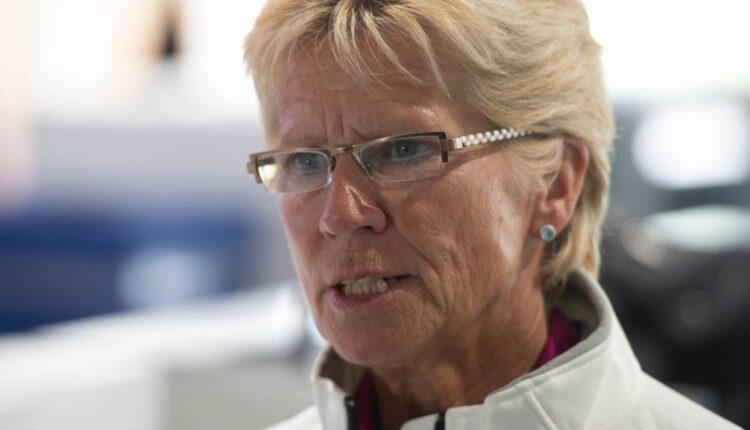 It was quiet last Sunday morning in the US Senior Open media center. The leaders were hours from teeing off in the final round at Saucon Valley Country Club’s Old Course and the buzz hadn’t yet built around Steve Stricker’s late charge that came up one shot short against Padraig Harrington.

More importantly, Mimi Griffin’s radio sat silently on a workstation. It was the last day of a grueling, several-week stretch for the president and founder of MSG Promotions, Inc., so it was welcome peace.

It also was one of the few times Griffin was not on the move. She spent more time in a golf cart last week than she did in her Allentown home.

“It’s been a blur,” Griffin said. “I regret that I didn’t journal it each evening because I can’t begin to remember all the things that happened.”

That has been the case since Griffin founded MSG in 1983 and began teaming with the USGA in 1995 to provide corporate hospitality. There is one common trait that comes with working with Griffin: It’s all-in, all the time.

The tournament director has given everything she’s had to whatever she’s done since her basketball playing days at Lancaster Catholic and the University of Pittsburgh, to her trailblazing college basketball broadcasting career, to what she and MSG have done for decades in the golf world.

“Mimi is a literal powerhouse,” said former USGA media relations director Pete Kowalski. “Her passion and energy for her work and her co-workers are incredible. She’s operated that way her entire career.

“I have been lucky to work with her since 1992 and saw her determination to provide the best in service in all of my 21 years at the USGA. It was an honor to be part of her team for the 42nd Senior Open at Saucon Valley.”

Griffin parlayed her first job in 1980 in the special events marketing department at Manufacturers Hanover Trust into a career of one dream job after another.

Her passion for basketball and business date back to her days as a 1,000-point scorer and 1974 state champion in high school.

She became the first female college basketball color analyst to work on an NCAA men’s tournament game in 1990.

It was around that time when she and her husband Bill applied for membership at Saucon Valley Country Club. There was a years-long waiting list there, but the club saw an opportunity — much like Griffin has throughout her career.

SVCC sought Griffin’s marketing expertise for the US Senior Open it was hosting in 1992. The Griffins’ membership was expedited and she was approached about coming on board to help in preparation for its big event.

In typical Griffin fashion, however, she didn’t want to just be part of the marketing plan. She wanted to lead the entire planning process as the tournament’s executive director. She did, and it was the most successful US Senior Open to that point. By a long shot.

The club made more than $2 million in ticket sales alone as the Lehigh Valley and surrounding areas came out by the tens of thousands to watch club per Larry Laoretti steal the show from the hall of famers in the field.

Griffin created a template for success that the USGA wanted. It hired MSG to manage its corporate hospitality sales, fulfillment and operations for the US Open, starting in 1995.

MSG set a record in June with 425 corporate clients at The Country Club in Brookline, Mass. — the site of the US Open. That combined with Griffin being executive director for the following week’s US Senior Open at SVCC made for challenges she and her staff had not seen before.

“Last week at Brookline, if it wasn’t the hardest, it was one of the hardest US Opens I’ve ever worked,” she admitted, “mainly because it was the biggest collection of corporate clients we’ve ever had.

“The week went beautifully, but was really hard. The biggest thing is having to get up at 4-something in the morning every day for two-and-a-half weeks. It was brutal. I have all the respect in the world for people who pull the early shift in anything. We’re at the course by 5, don’t leave until 8:30 … 9 o’clock at night. That doesn’t leave time for much else, except sleep and not enough of it.”

One could see the fatigue in Griffin’s eyes last Sunday morning. You could also hear the appreciation in her voice for her staff that was split between the two sites during the US Open week. US Senior Open championship director Jim Holden and others kept preparations on schedule in the Lehigh Valley while Griffin and others ran the show at Brookline.

Griffin was thrilled to see what transpired at SVCC for the US Senior Open.

“I was in tears when I came back here and saw what my staff had completed while I was in Boston,” Griffin said, “I was in awe. I can’t say enough about my staff.”

Jeanne Taylor and Shelley Berlin were with Griffin at Brookline. Maizee Freeman and Olivia Roseman were among those polishing things up in the Lehigh Valley for the third US Senior Open at SVCC.

The second event in 2000 picked up where the 1992 record-breaker left off, with nearly 150,000 fans attending that week. It also was before the Lehigh Valley had triple-A baseball at Coca-Cola Park and AHL hockey at PPL Center.

This year’s tournament had a different look and different feel for a lot of reasons. The Lehigh Valley’s corporate structure changed. So did its sports market. So did many things since the COVID-19 pandemic struck in 2020.

It still was another success story on a different scale. Griffin wasn’t going to let it be anything else.

Griffin and company recognized they had to change their approach. this led to a fresh experience, including her 19th hole creation. She took ideas from other pro golf events and tied these into a fun area for children and adults that was surrounded by the three finishing holes at SVCC.

“I took the philosophy that if talk about it loud enough and long enough,” Griffin said, “people will come on board.”

It took time, but sponsors such as Lehigh Valley Health Network, Yuengling, CF Martin & Co. and Wind Creek, jumped on board. An average of more than 3,000 fans per day bought 19th hole-specific tickets.

Many of Griffin’s ideas, concerns, etc. come to her while she’s sleeping. A surprise to no one, she has long kept a notepad and pen on her bedside table. Imagine how many notepads and pens she has gone through the last four decades.

Last week’s US Senior Open was Griffin’s swan song. She said it is time to let others take the lead, including Holden who has been with her since interning at the 2007 US Open.

Griffin and her team have made the USGA hundreds of millions of dollars through corporate hospitality thanks to her creative energy and attention to detail. Her curiosity has kept her energized.

“I have been blessed to have people around me who have allowed me to do this,” she said through tears. “Now, I need to make sure that others can be equally blessed.

“The only way I can do that is to step away. But I’m only a phone call away.”

Griffin will become a grandmother for the first time in the coming weeks. She’ll have her annual family time at the beach in Avalon, NJ

She also will take time to look back on what she and her staff pulled off with consecutive USGA tournaments.

“It’s been the downslope of a roller coaster,” Griffin said. “I was white-knuckling it, hoping I’d make it until June 27.”

Everything Griffin did in her career was done at a breakneck pace. Failure was never an option. She felt a sense of calm last Sunday in the media center because she did everything she could to make sure everything she signed up had the best possible outcome.

The numbers — on the basketball court, in the TV ratings and on the companies’ bottom lines — are proof of a rosy legacy.

Mimi Griffin has been a trailblazer for 40 years. Her influence was felt in college basketball, broadcasting and professional golf. It came to an end last Sunday at the 42nd US Senior Open at Saucon Valley Country Club, where she is a member. Here are her career highlights: