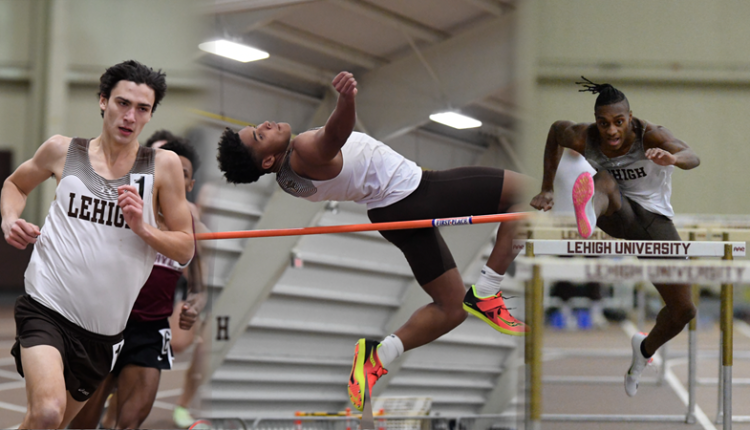 LEWISBURG, Pa. – The Lehigh men’s track and field team competed in its final indoor meet of the regular season before heading back to Bucknell next weekend for the Patriot League Championships. The Mountain Hawks finished the Bucknell Tune-Up with 15 PRs and five first-place finishes on Friday.

“This meet was a great chance to get the kids out to Bucknell before the Patriot League Championships and get them familiar with the facility,” said head coach Matt Utesch. “We had some solid performances but have a lot left in the tank for next weekend.”

First-year Jonathan Bennett continued to have an impressive start to his Lehigh debut season. Bennett finished first in the 60m hurdles with a time of 8.17. Following in Bennett’s footsteps, fellow first-years Aidan Lynch and Skyler Mott continued to find success for Lehigh. Lynch grabbed his first collegiate win in the 3000m with a time of 8:46.19. Mott also grabbed a first-place finish for Lehigh. The first year finished the high jump with a new PR of 1.94m.

Junior Kerem Ayhan finished the 800m with a time of 1:56.25, grabbing Lehigh’s fourth first-place finish on Friday. The Mountain Hawks’ 4x400m relay team finished the Bucknell Tune-Up with a win on Friday. The relay consisting of first-year Patrez Thomas, juniors Kerem Ayhan and Douglas Cooke and senior Harrison Ernst, finished with an overall time of 3:25.32.

On top of Ayhan’s first-place finish, Lehigh swept the 800m on Friday, finishing in the top four spots with three PRs for the Mountain Hawks. Juniors Joseph Cranley (1:56.36), Thomas Leitner (1:57.44) and Ethan Davis (1:57.95) all followed in Ayhan’s footsteps, finishing in second, third and fourth, respectively. Cranley and Hood both finished with PRs in the 800m as well as sophomore Griffin Pumilia who finished with a time of 1:59.49.

Junior Riley Williamson continued to finish with impressive times for Lehigh. Williamson finished fifth in the mile with a new PR of 4:39.98.

On the field side, Lehigh added four more PRs on Friday. Sophomore Achilles Mouzakis (16.25m) and junior Quinn Conlan (15.71m) both finished with PRs in the weight throw. The duo finished seventh and eighth, respectively.

“Everyone on the team has worked hard enough to compete at the Patriot League Championships next weekend,” said Utesch. “A lot of the guys made a statement tonight on why they should be on the roster to come back to Bucknell next weekend and compete for us.”

Lehigh will head back to Bucknell next Saturday for the two-day Patriot League Championship. Field events on Feb. 26 will begin at 11 am with the women’s weight throw and the men’s pole vault. The first track event will begin at 1 pm with the men’s 60m hurdles prelims.