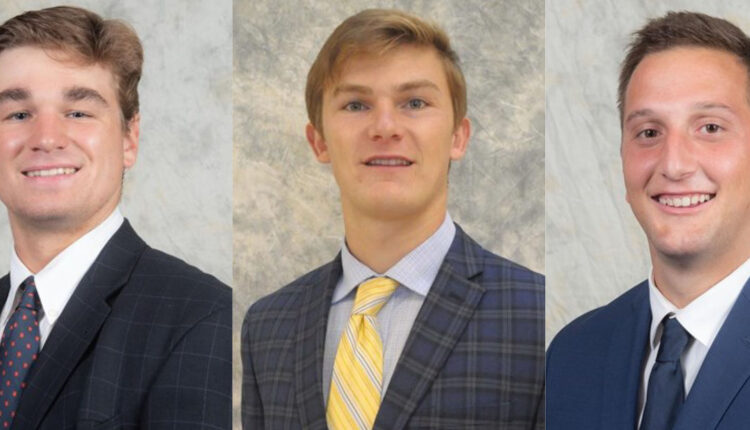 Men’s lacrosse seniors Cole Kirst and Tommy Schelling, along with graduate student James Spence have all been named finalists for the NCAA Senior CLASS award.

No other program landed more than two student-athletes on the list of 20 lacrosse players from colleges around the country.

CLASS stands for “Celebrating Loyalty and Achievement for Staying in School” and is given out to one senior or graduate student every year who has shown excellence in the areas of community, classroom, character and competition.

Senior lacrosse players Cole Kirst, Tommy Schelling, and James Spence were named Lehigh’s CLASS Award Candidates for 2022 on March 14. CLASS is an acronym for Celebrating Loyalty and Achievement for Staying in School. (Courtesy of Lehigh Sports)

The CLASS award is the NCAA’s premier award for seniors who have thrived both academically and athletically, according to their site.

Schelling, a mechanical engineering major, said it was an honor to be considered for the award.

Kirst and Spence were thankful towards their teammates, coaches and professors who have helped them make it a position to be considered for the award.

“I wouldn’t be here without any of them,” said Spence, who is earning his Masters of Science in business management. “They’ve all pushed me and guided me in the right direction to where I need to be today. I’m very fortunate to have the people that I’ve had around me.”

Kirst, a journalism major, said the award is unique since all the nominees have different majors and workloads that influence their experience off the field.

“We’re studying very different subjects, but we all have the same mindset of trying to do our best in the classroom as well as on the field,” Kirst said.

All three nominees mentioned the difficulties that come with being academically driven student-athletes.

Spence said the experience of playing on a Division 1 athletic team is a full-time job and explained that the focus and persistence of being a student-athlete is taxing.

Schelling and Kirst are both considering returning to Lehigh next year to pursue a master’s degree and take advantage of the extra year of athletic eligibility that has been provided due to COVID-19.

Spence said he is optimistic about a career in management after Lehigh.

But the lacrosse season this year is not nearly over.

The Men’s lacrosse team is currently undefeated in the Patriot League and is coming off a 14-7 win against Lafayette on Saturday.

Spence said the team feels confident that they can make a run for the Patriot League championship this year and beyond to the NCAA tournament.

Kirst said through community, classroom, character and competition, he and his two teammates have given their all to Lehigh, and the community has returned the favor.

“Everyone has positive energy walking to and from class, up to the dorms, or to FML, or even The Goose,” Kirst said. “I think the people at Lehigh are what makes it so different, so special, and in my four years here I couldn’t have pictured any other way than being around such great people.”

The list of 20 student-athletes nominated for the award will be cut in half as the season progresses and then the ten remaining athletes will be placed on a ballot, which will be sent to media, coaches and fans around the country.

The CLASS award will be announced at the same time as the Lacrosse National Championship in May.

These blue states are prepping to become abortion havens | Analysis