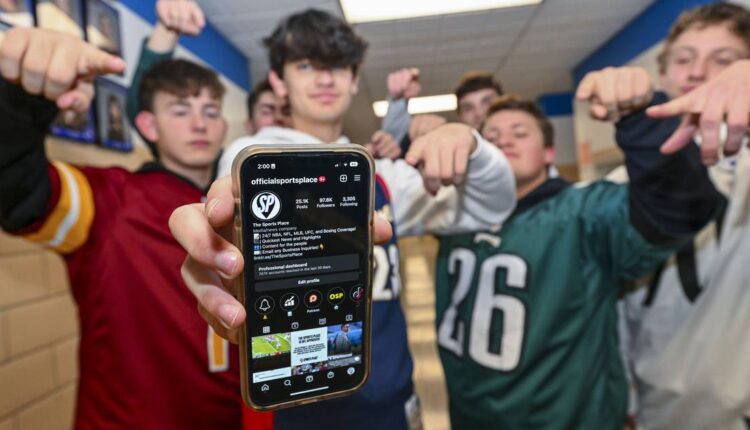 It was nearing midnight when Arye Pulli got a phone call from his friends.

The six boys, who have been friends since elementary school, set a goal to reach this milestone by the end of the year, but they met their follower target sooner than expected Dec. 8th.

“We got a little cake, and we celebrated that way. We had a little get together. But obviously, the mindset adapted,” Pulli said. “We’re big believers that the world just doesn’t stop around you. We had to [keep] on going even though we had a big moment.”

The Sports Place is dedicated to sports news with player updates and highlights videos from the NFL, NBA and MLB. The next milestone for the social media account will be reaching 200,000 followers, Pulli said, but the adjusted 2022 goal is now reaching 110,000 followers by the end of December.

Pulli couldn’t have anticipated such a large following when he started the account in 2019 with friends Evan Davis and Jason Perillo.

The project failed to take off at the time, until they revisited it again during the summer of 2020. The high school students were looking for a way to keep busy through quarantine during the early days of the COVID-19 pandemic.

“It was kind of rough because we couldn’t really see each other much,” Davis said. “But I think starting this [venture] really brought us together even more.”

The three students added friends Nathan Baker, Chase Price and Lincoln Heimbach to their social media team, and within three months, The Sports Place had 10,000 followers.

“It was really small at the beginning, and we were just doing it for fun almost, and then we were like, ‘Wow, this is really becoming something, and we should buy into it a little bit more,’ ” Heimbach said.

In recent months, the students have mainly posted NFL news, and in October, their account was approved by the NFL as a credentialed and reliable news outlet. This allows them to receive news releases and other news directly from the NFL.

Pulli applied for the status twice before, but was denied until this most recent successful attempt.

“People see that, and they’re like, ‘Oh, they’re NFL approved. I can trust them,’ ” he said. “It really means a lot to us because we’ve worked really hard to get this.”

Pulli said he believes interest in the NFL season has driven the account’s recent growth.

In the last about three months, the page gained 19,000 followers and received 57 million impressions, which refers to the number of times page content has been viewed by users.

“Our goal now is just to try to convert those people that are looking at our page to followers so we can get those up,” Davis said.

Bryan Wolf, a Nazareth health and physical education teacher, said he uses The Sports Place to keep up with the Las Vegas Raiders. Social media is an easy way for sports fans to stay up to date, he said.

“You log on to Instagram, boom, there it is,” said Wolf, who also coaches Nazareth’s baseball team. “Really, I’m using them as my main source of information when it comes to the sporting world.”

Using editing applications, the students create templates to place text and filters over photos of players, and in the description box below, they add information and statistics fans want to know. They also post game highlights by curating videos from league and team social media accounts.

Perillo said he sometimes reaches out to players to share video clips of impressive plays they had. He has talked with players on social media, such as Baltimore Ravens quarterback Lamar Jackson and Miami Dolphins running back Jeff Wilson Jr., who recently posted one of the page’s videos to his own Instagram account.

“We love that,” Perillo said. “It’s just checking up with them and saying, ‘Hey Jeff, you had a great game today, you’re balling out, great job,’ and always creating that relationship with them.”

The Nazareth students all love sports, so connecting with players, creating posting schedules and figuring out who will cover games is more a hobby than work, they said.

Still, they run The Sports Place all while juggling honors and Advanced Placement classes, as well as playing on sports teams.

“They’re killing the game,” said Mindy Heimbach, Lincoln’s mother, who has watched The Sports Place grow from its start. “I don’t know how they do it, but they do.”

The students play all a range of sports, including baseball, basketball and volleyball, either for their school or a community team. And when they meet up outside school, the group often spends time playing sports, too, such as whiffle ball or football.

With the excitement of the NFL this time of year, the friends are sometimes at odds with whom they root for. Sweater cheers on the Denver Broncos while Heimbach and Davis are Philadelphia Eagles fans.

“It’s pretty hard sometimes having to listen to the Philly fans,” said Perillo, who roots for the Pittsburgh Steelers, along with Price.

“There’s definitely some debates and arguments about things, but it’s fun,” added Baker, who is a New York Giants fan.

“It’s growing around the world,” he added. “That’s why we thought it would be a good idea to start covering it.”

The teens also recently branched out to in-person reporting last month when they covered the annual Lehigh University-Lafayette College rivalry football game. They also went to a prior game for each team to write a preview. They took photos, interviewed players and sat in the press box.

“It was cool,” Baker said. “It was definitely a fun experience to see how that goes and interact with [players] and get their mindset of things and how they saw things throughout the game.”

When it comes to what’s next for The Sports Place, Pulli said the friends want to cover more games in person, such as NFL games at nearby stadiums. The teens are also discussing the possibility of creating merchandise to sell.

Ultimately, though, the students said The Sports Place is more than a potential business venture. It has allowed them to become even closer friends.

“It is a blessing to be able to run a sports account with your best friends,” Perillo said. “It’s awesome because you’re following stuff that you love, doing it with the friends that you love most, and that’s truly awesome.”