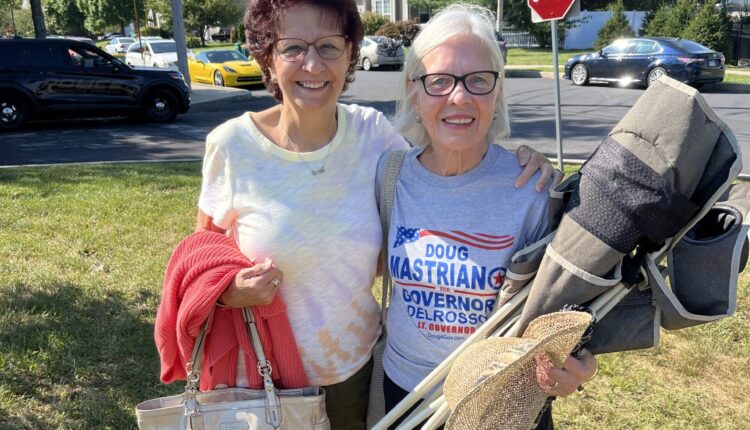 Mastriano’s religious values resonate with supporters, but poll shows him down among Republicans

Supporters who attended Republican gubernatorial nominee Doug Mastriano’s campaign events in suburban Philadelphia this week said his campaign messaging hits all the right notes for them.

But a poll of registered Pennsylvania voters released Thursday shows Mastriano lagging behind Democratic nominee Josh Shapiro among undecided voters and in support from members of his own party.

A supporter who attended an event Wednesday in Pennsburg said he’s concerned Mastriano isn’t doing enough to reach beyond those who already agree with his staunchly conservative platform.

“I’d like to see him talking to more than just Republicans,” said the Montgomery County resident who asked to be identified by his first name, Bob, because he was concerned that sharing his political opinions could affect his professional relationships.

“If he doesn’t get out and talk to more people in Pennsylvania, he’s gonna have a hard time of it,” Bob said.

Mastriano has largely walled himself off from local print, digital and television news outlets, preferring to appear on conservative talk radio and right-wing sources such as Brietbart.

“He already has those people,” said Mariana, Bob’s mother, who also asked to be identified by her first name. “So he has to go out and get the independents, and even some Democrats.”

The Franklin and Marshall College Poll released Thursday shows Shapiro ahead of Mastriano 44 percent to 33 percent. Shapiro is also ahead of Mastriano among undecided voters 40-24 percent, according to the poll which includes the responses of 522 registered voters.

Shapiro has support from 76 percent of Democrats polled compared to 66 percent of Republicans who support Mastriano.

In his stump speeches Wednesday, Mastriano spent much of his time painting Shapiro and outgoing Democratic Gov. Tom Wolf as “extreme” for policies including pandemic restrictions on business and mask requirements for students.

But some supporters mentioned Mastriano’s evangelical Christian values as the primary reason they find him to be an attractive candidate.

Susan Curley, a retired teacher from Pennsburg, said she sees Mastriano as the right candidate because, “he’s a believer in Jesus Christ.”

“We need a believer in Christ as the head of state government,” Curley said.

Curley cited the discussion of LGBTQ issues in schools and abortion as major issues in which faith should play a role in state government.

“I like his stance on biblical issues. He’s pro-life,” Johnson said after Mastriano’s Montgomery County event. “I believe that, at the moment of conception, that that is life.”

Mastriano, a vocal opponent of abortion access, once called abortion his No. 1 issue, introducing a proposal banning abortions after six weeks, which is before most people know they’re pregnant.

Since the primary election and the Supreme Court overturning Roe v. Wade, Mastriano has been largely silent on the topic in campaign speeches.

Since winning GOP primary, Mastriano has kept silent on abortion. Physicians urge him to break it

The Franklin and Marshall poll included questions about respondents views on abortion. The results show a shift since May. The number of people who said abortion should be legal under any circumstances increased 6 points to 37 percent while those who favor a total ban declined from 14 percent to 11 percent. More than half, say abortion should be legal with some restrictions.

Some Mastriano supporters attending Wednesday’s events  said they don’t support abortion rights, but would support some exceptions to a ban.

“The mother’s life would be the only exception I would make. Because you can’t say one life is more important than the other,” Curley, the retired teacher said.

Helen Andersen of Macungie, Lehigh County, said she only objects to publicly-funded abortion, which Pennsylvania law already prohibits except in cases of rape, incest or to save the life of the mother.

Andersen added that she believes people should take care to avoid the need for abortion, having seen its effect on friends’ mental wellbeing.

KHN’s ‘What the Health?’: The Future of Public Health, 2022 Edition

Abortion access is on the ballot in November in these states. What you need to know