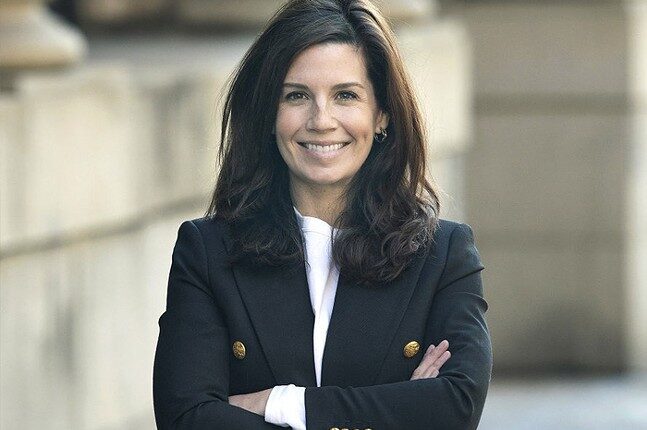 Doven, an Ohio Township resident who founded her own public relations firm in 2014, bills herself as a “pragmatic progressive.” Her campaign website touts her experience as “one of the nation’s youngest big-city mayoral press secretaries from 2006-2013.” During that time, she provided communications services to two mayors, the late Bob O’Connor and Luke Ravenstahl.

The tweets QBurgh highlighted were from 2015 and include commentary on the Rachel Dolezal controversy, in which a white woman pretended to be Black for much of her adult life for professional gain.

“So if a man can feel like he’s a woman and vice versa – why can’t a white person feel like they are [Black?]” Doven tweeted in June 2015.

In response to criticism of her comments, Doven tweeted a lengthy thread arguing the QBurgh piece was part of a “coordinated Twitter attack” while stating that she believes in “tolerance, understanding, and quite frankly—loving each other.”

Jim Sheppard, who authored the QBurgh piece and who worked at Ravenstahl’s during Doven’s tenure, responded to the thread with an allegation that Doven was singularly responsible for delaying Ravenstahl’s 2012 public announcement of support for marriage equality.

“Joanna, you are literally the single reason Mayor Ravenstahl DIDN’T come out in support of marriage equality earlier,” Sheppard tweeted. “You personally blocked it and provided quotes to the media that were not in line with the administration’s decision making.”

Sheppard shared a screenshot of an On Top Magazine story referencing Pittsburgh Post-Gazette reporting from 2012 in which Ravenstahl is quoted suggesting that earlier that year, Doven incorrectly told reporters that Ravenstahl did not support gay marriage.

“My position actually changed well before that,” Ravenstahl told the Post-Gazette.

In a phone interview with Pittsburgh City Paper, Doven called Sheppard’s statement “very libelous and slanderous … Anything relative to remarks from 2012 would have come directly from the mayor,” Doven said.

In response to the allegation that she was personally responsible for delaying Ravenstahl’s announcement, she said“I certainly did not have that much power in the administration.”

“This is the first time I am ever hearing this,” she continued. “If this was something that I had done against the mayor, I’m pretty sure I would have heard of it.”

Doven referred to her work with former Delta Foundation president Gary Van Horn on LGBTQ issues during the Ravenstahl administration as “historic.”

“I will be having eye-to-eye conversations with members of the LGBTQ+ community. I already am,” she told City Paper. “One of my best friends is in the community. We talk every day.”

“During the times my voting record is being attacked, she was convicted for selling drugs and I’m told had been arrested 14 times,” Doven tweeted.

Several Twitter users have responded to Doven’s thread saying they felt it inappropriate for Doven to bring up Hallam’s drug conviction, but Doven told City Paper she disagrees.

“If it’s game on for me to be attacked from every single angle and I can’t talk about [Hallam’s recovery]? No. I think if you’re telling people you’re in recovery when you’re not in recovery, that’s fair game,” she said. “She’s not behaving as somebody who at least has their substance use disorder under control.”

Hallam did not respond on the thread, but said in a statement to City Paper that she is not ashamed of her history.

“I am disappointed that my opponent launched her campaign by attacking my character and my recovery journey,” Hallam said. “I am not ashamed of my past, and I will not perpetuate further stigma around substance use disorder. My personal experience with our failed carceral system led me to public service. More negativity may come up throughout this election cycle, but none will come from my campaign.”

“I’m focused on the work we’ve done so far — paid sick leave for all workers, a fracking ban in our County parks, jail reform, and so much more. When she’s ready to talk about the issues faced by the residents of Allegheny County, I’m ready. Until then, I look forward to continuing to work toward a County that works for everyone,” Hallam continued.

Lehigh Rolls to Victory Over Rider