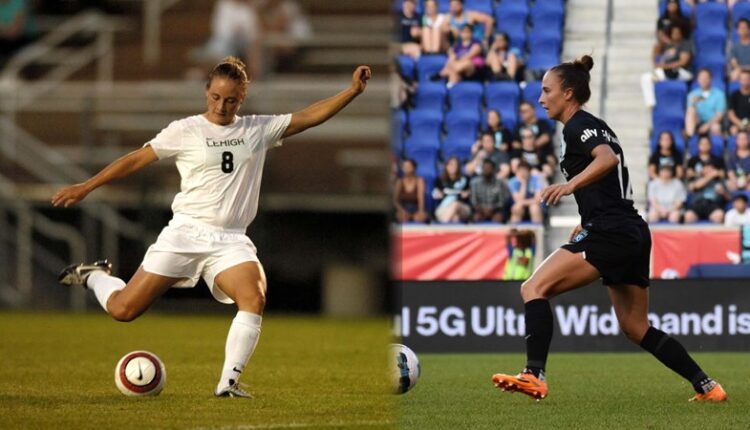 The 2007 Lehigh graduate and two-time Patriot League Player of the Year retired from professional soccer in July after a 15-year playing career and is returning to her alma mater in a dual role. Lewandowski will be working with Lehigh Athletics’ Sports Performance team while also serving as an assistant coach for the women’s soccer program.

In her new role, Lewandowski will support the sports performance team in the student-athlete development realm, assisting with elements including, but not limited to, peak performance, recovery, fueling, mental performance and physical training.

Lewandowski also wants to assist former Lehigh teammate Lauren Calabrese ’07, who is in her first season as the head coach of the women’s soccer program.

One of the most accomplished performers in Lehigh women’s soccer history, Lewandowski scored 36 goals and racked up 80 points from 2003-2006. She ranks second in program history in both categories and scored a program-record 15 game-winning goals in her career.

The 2003 Patriot League Rookie of the Year, Lewandowski won the first of her back-to-back Patriot Player of the Year awards in 2004, where she racked up a single season record-tying 15 goals and scored 30 points while helping lead Lehigh to the Patriot League Championship Game. She was a four-time first-team All-Patriot League honoree.

Following her graduation in 2007, Lewandowski began her professional career in Germany with 1. FFC Frankfurt, and in her first season became one of the only Americans to ever capture a treble (when a club wins three trophies in a single season) – winning the Frauen Bundesliga, the Frauen Pokal and the competition now known as the UEFA Women’s Champions League.

Lewandowski briefly returned to the United States to play for the Western New York Flash of WPS (Women’s Professional Soccer) for one season. She then returned to Germany to and joined FC Bayern Munich, where she played with one of Europe’s most well-known clubs from 2012-2019.

In 2019, Lewandowski returned to the US and joined Sky Blue FC of the NWSL, which eventually became Gotham FC and then in 2021, was rebranded as NJ/NY Gotham FC. She continued to play for NJ/NY Gotham FC until hanging up her boots following a game on July 2, 2022.

Lewandowski’s remarkable playing career also included one cap for the US Women’s National Team, in a friendly against Brazil on Oct. 25, 2015.

A Coopersburg native and graduate of Allentown Central Catholic High School, Lewandowski graduated from Lehigh in 2007 with a degree in biology.