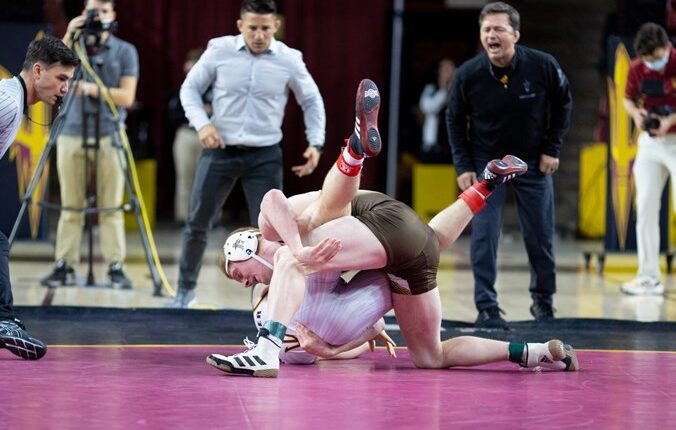 Lehigh’s Second Half Rally Comes Up Just Short At No. 13 Arizona State

Trailing 14-3 at intermission, the Mountain Hawks stormed back with three consecutive wins, including a technical fall and a fall, to take a 17-14 lead with two bouts remaining. Arizona State went back in front with a win at 197 and clinched the dual with the heavyweight win by Schultz.

“We wrestled pretty well,” Lehigh head coach Pat Santoro said. “We were a little shorthanded coming in so we knew we had to wrestle really well. Our guys competed hard. We knew it could come down to heavyweight and that’s exactly what happened. It came down to an overtime, ride out. We had opportunities , but this is all about getting ready, so hopefully we can switch some of these results around at the NCAA tournament.”

Arizona State raced to an early 8-0 lead behind their top five-ranked wrestlers at 125 and 133 as Brandon Courtney used a late four point near fall to earn a 10-2 major decision over Sheldon Seymour and then Michael McGee followed with a 12 -4 major decision over senior Satoshi Abe.

The Mountain Hawks picked up their first win at 141 as senior Dan Moran bested Mykey Ramos 8-2. Moran scored a takedown in the second period and added two more in the third to bring Lehigh within 8-3 after three bots.

Ninth-ranked Kyle Parco made a first period takedown stand up in a 5-2 decision over first-year Max Brignola at 149.

The first half of the dual finished with a top eight matchup between junior Josh Humphreys and Jacori Teemer at 157. Teemer led 2-1 after one period after a potential Humphreys takedown and near fall was not awarded upon review and Teemer was awarded a takedown of his own following a separate review.
Tied 2-2 early in the third, the match turned when Teemer caught Humphreys for a takedown and four near fall points. Humphreys escaped and ultimately scored a takedown of his own, but could get no closer as Teemer’s 8-5 decision put ASU up 14-3 at intermission.

Sophomore Brian Meyer gave Lehigh some momentum out of intermission with his second top 10 win of the season as he defeated Anthony Valencia 6-1 at 165. Meyer scored takedowns in the second and third periods and rode Valencia for a majority of the third period following his second takedown.

“Brian did a great job,” Santoro said. “He was consistent and stayed within himself. He stuck to his own game plan and did a really nice job.”

At 174, Jake Logan followed Meyer’s win with his first career bonus point victory. Logan racked up seven takedowns and scored a late four point near fall to secure a 20-5 technical fall over Ryan Rochford to bring Lehigh within 14-11.

Sophomore AJ Burkhart then put the Mountain Hawks in front. Trailing Josh number 4-1 in the second period, Burkhart took number down to his back. Number tried to make his way off the mat but Burkhart kept his toes in bounds and was able to hold Number down, getting a huge fall at 4:50 to give Lehigh the lead.

“Jake and AJ both knew what they needed to do,” Santoro said. “AJ getting his pin put us in a position to win. He did a great job. We created opportunities in a match where a lot of people didn’t give us a chance. These guys didn’t believe that.”

Tenth-ranked Kordell Norfleet put ASU back in front 18-17 securing a late takedown to earn a 12-4 major decision over JT Davis at 197.

The decisive heavyweight bout was tied 1-1 through regulation and the sudden victory period. In the tiebreakers, Wood was down first and escaped in 12 seconds. Schultz answered with a quick escape to take the lead on riding time and added a late takedown following a desperation shot attempt from Wood to claim the 4-2 decision.