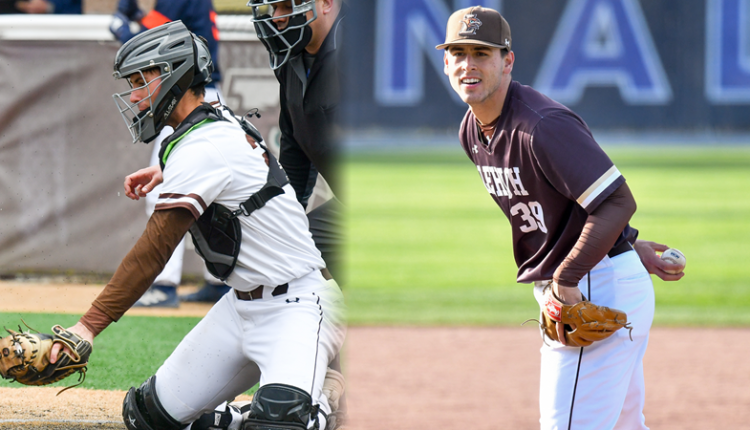 The 2022 MLB Draft class marks the third draft in the last four years with a pair of Mountain Hawks selected (Levi Stoudt and Jason Reynolds in 2019; Mason Black and Matt Svanson in 2021).

“Both of these young men are shining examples of what Lehigh strives to produce on a regular basis: Dean’s list academic profiles, active community and leadership student-athletes that are also elite in the sport,” said head coach Sean Leary. “The way they represent Lehigh University and the baseball program is exemplary, much like Mark Washington, Stoudt, Black and Svanson are currently doing.”

Retzbach had an excellent 2022 season, highlighted by a First Team All-Patriot League selection at catcher. Retzbach hit .293 with a Patriot League leading 11 home runs while playing all 50 games. He slugged .560 with an on-base percentage of .397 for an OPS of .957, finishing second on the team. His 54 hits were good for third on the roster with 46 RBIs, ranked second. Behind the plate, Retzbach had one of the best arms in the league, throwing out a league-high 17 batters and also had one of the best gloves with a .991 fielding percentage. He had 290 putouts with 40 assists on 333 chances and only three errors.

In the classroom, Retzbach excelled as a two-time Academic All-Patriot League selection. He was named Patriot League Scholar-Athlete of the Year in 2022, the program’s first-ever honoree.

“Retz is an excellent example of how putting in the hard work behind the scenes resulting in huge strides in his game. He arrives with the early groups for hitting and always leaves with the last group,” said Leary. “His arm and his defensive skills are obvious plus pro tools. But when his power potential started to flourish this spring he began to emerge as power bat prospect at a premium defensive position.

“He’s also very athletic, a lot like Matt McBride ’07, and so he will add value with his versatility.”

Lauded by his high velocity, Torres emerged as a key member of the Mountain Hawks’ starting rotation throughout the 2022 season. He went 3-1 on the year, tied for the second-most wins on the staff and had 45 strikeouts with 20 walks in 34.2 innings pitched.

“Carlos’ dedication and work ethics have paid huge dividends,” Leary said. “He has made significant improvements in his mechanics and pitch development and his efforts in the gym has scouts excited about his long-term durability.

“I strongly believe he is just beginning to scratch the surface of his upside potential. If he continues on this trajectory, he will be a successful major league arm in a few years.”

Lehigh in the MLB Draft

*Drafted in high school prior to attending Lehigh