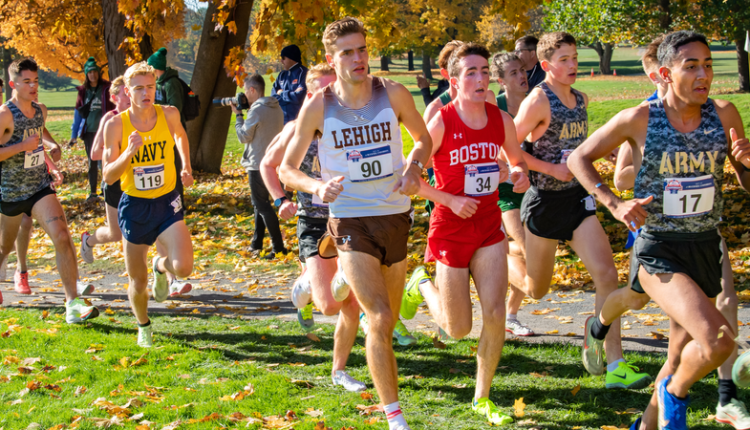 UNIVERSITY PARK, Pa. – The Lehigh men’s cross country team closed out the season with a 16th-place finish at the NCAA Mid-Atlantic Regionals on Friday morning in University Park, Pa. Senior Tyler French led the Mountain Hawks with a 34th-place finish, securing his fourth top finish for Lehigh this season.

“I think Tyler said it best, he said, ‘when I was a first-year, if you were to tell me I finished 34th in this race, I would have called you crazy,'” said head coach Todd Etters. “I think credit to him for how he started believing in himself over the last half of the season. The effort and the work ethic was really strong with him and was always there but the level of confidence that came out of him this year, the results speak for themselves.”

“It was tough conditions today but our goal as a team was to run tough, be patient and move up throughout the race,” said French. “I was shooting for top 25 and narrowly missed out but I am happy with how I finished overall.”

Joining French in the top 100 was sophomore Kevin Harvey, who made his Mid-Atlantic Regionals debut for the Mountain Hawks. Harvey finished his first 10k race in 31:47.8 to grab a 70th-place finish overall and a second-place finish for Lehigh.

“We’re a young group,” Etters said. “We ran five first-years and sophomores today. I’m impressed with how hard they raced today. Some of our flaws have been that we have not been able to stick together as a pack and run as a group all the way through the finish line.

“That hurt us a little bit but you can tell our guys are starting to respond better to each other,” Etters continued. “Kevin’s been making really strong moves in the middle of the race and we really need the entire pack to make that kind of move but it’s coming. It’s the end of the season but that doesn’t mean we can’t get better and keep working on it through track and hopefully be in a better position next cross country season.”

Three Lehigh first-years made their Mid-Atlantic Regional debuts on Friday. Adam Barbato led the pack, finishing 136th with a time of 33:14.9. Following close behind were Alex Heidemann and Carter LoPresti, who finished 144th and 162nd, respectively.

Friday’s race marks the end of the 2022 season for the Lehigh men’s cross country team.

“I felt like we didn’t have much of a heartbeat two weeks ago at the Patriot League Championships,” said Etters. “We didn’t fight the way that we wanted to fight and I thought today we fought hard. We were in the mix with some really good teams. We wound up 16th but I think we were in the mix with the teams that we thought we could fight with all along and that’s kind of how our season’s been.

“We were fighting but I don’t think we were fighting at the level we needed to every race so this season was a little bit frustrating as a group because you always come in with high expectations, wanting to achieve a lot of things but it also means that in our world, it means you can move onto track and use this as motivation and I think that’s what we want to do,” Etters continued. “We want to learn from this and get better and just keep developing as a program.”

Path Cleared for Georgia to Launch Work Requirements for Medicaid