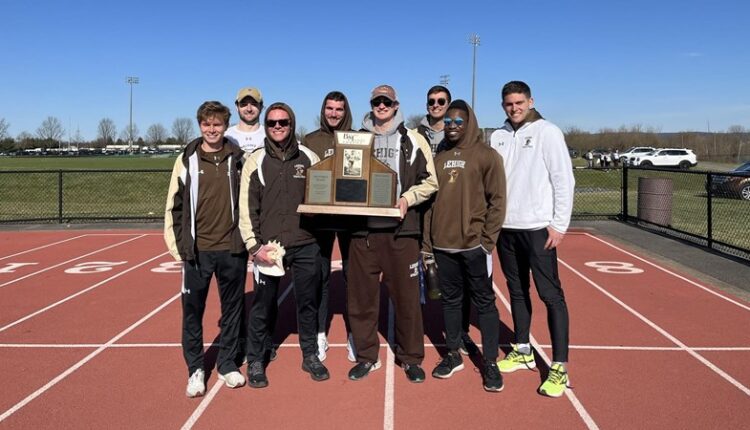 EASTON, Pa. – The Lehigh men’s track and field team earned its second win of the year against Lafayette on Saturday, defeating the Leopards 117-86. The Mountain Hawks finished the dual meet with 13 first-place finishes and 17 PRs. First-year Jonathan Bennett was named the men’s track athlete of the meet and junior Ian Scott was named the men’s field athlete of the meet.

“I’m always happy to win and will not complain about today’s win,” said head coach Matt Utesch. “The team got off to a slow start today and this is the first year we’ve had the meet this early on the calendar and I saw the effects of it. I think we’re a better team than we showed today and I hope when the championships come around we have more intensity.”

“I think Ian Scott is sort of like a locomotive,” said Utesch. “He’s on time, pretty powerful and pretty fast. He brings it every meet and constantly delivers. He did a great job today.”

Lehigh continued to show improvement in the throws as well on Saturday. Sophomore Achilles Mouzakis continued to put up solid marks, winning the hammer throw with a PR of 52.80m. Mouzakis finished sixth in the discus with a PR of 37.57m behind first-year Liam Lovering who finished second with a mark of 44.75m.

“Achilles did well today and he really deserves it,” Utesch said. “He works so hard in the weight room and the more he throws the more PRs we’ll see. He’s strong and we’re going to continue to see him improve.”

The Mountain Hawks have been putting up solid times on the track this season and continued to show improvement at Easton on Saturday. Lehigh finished with eight PRs and eight first-place finishes on the track.

Bennett led the way for Lehigh in the sprints, finishing first in both of his events on Saturday. The first-year earned a new PR in the 110m hurdles (14.39) and finished the 200m with a time of 21.67. Junior Drew Roman was close behind Bennett in the 200m, finishing second with a PR of 22.82.

“He’s following in Ian Scott’s footsteps,” said Utesch. “He’s on the same track as Ian and I think we’re going to continue to see him improve throughout the season.”

Fellow first-year Patrez Thomas is continuing to have a solid outdoor season. Thomas finished first in the 400m hurdles with a PR of 55.25. He went on to win the 4×400 relay with senior Harrison Ernst and juniors Brandtson Duffie and Kerem Ayhan (3:21.98).

“Brandtson has sort of been in the shadows of Burke and [Jacob] Martinez this year,” Utesch said. “It was great to see him come out and win today.”

Martinez was one of the several Mountain Hawks to finish the dual meet with a win on Saturday. The junior won the 1500m with a time of 4:01.28. First-year Aidan Lynch finished second with a time of 4:02.41 and junior Ethan Davis finished fourth with a new PR of 4:05.78.

Graduate student Seth Slavin earned another first-place finish for Lehigh in the 5000m. Slavin finished with a new PR of 14:51.43. Senior Nick Wilson finished behind Slavin, coming in second with a time of 15:09.67.

“I just want to give a quick shout out to all of our alumni who came out and saw us today, specifically Dave McVegh and Dave Thomson,” said Utesch. “Thank you all for your support!”

The Mountain Hawks will remain in Bethlehem next weekend to host the Lehigh Invitational on Saturday, April 9. The meet is scheduled to begin at 10 am at Goodman Track and Field Complex.