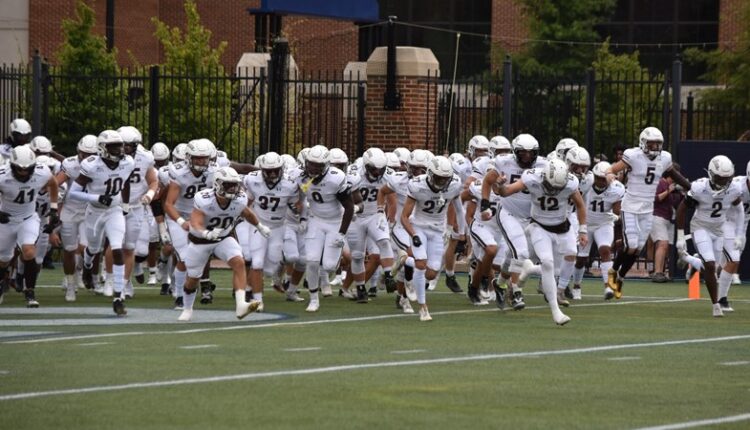 Lehigh climbed out of an early 10-0 hole, scoring 21 of the next 24 points in his win at Georgetown. Senior Zaythan Hill and sophomore Gaige Garcia scored rushing touchdowns for the Mountain Hawks, while junior Eric Johnson’s 12-yard touchdown catch gave Lehigh the lead just before halftime. The Mountain Hawks gave up a late touchdown but a strong team defensive effort thwarted Georgetown’s game-tying two-point conversion attempt. Senior TyGee Leach led the defense with 14 tackles and three tackles for loss.

Lehigh enjoyed another strong rushing day at Georgetown as the Mountain Hawks totaled 158 rushing yards. The trio of senior Zaythan Hill, junior Jack DiPietro and sophomore Gaige Garcia combined to carry 24 times for 181 yards and two touchdowns, while averaging nearly 7.5 yards per carry. Hill broke off a 60-yard run before his first touchdown, while Garcia opened the second half with a 27-yard rush, followed by a 25-yard run for his first Lehigh touchdown. So far this season, the trio has carried 55 times for 322 yards, an average of nearly six yards per carry.

A strong second helped defensively and a late stop of a two-point conversion were keys to Lehigh’s league-opening win at Georgetown. Senior safety TyGee Leach led the defensive effort, recording a career-high 14 tackles, including 13 solo stops, and adding a career-high three tackles for loss. He was credited for stringing Georgetown’s game-tying two-point conversion attempt out wide where his Lehigh teammates were able to make the tackle, preserving the Mountain Hawks’ 21-19 victory. For his efforts, Leach was named Patriot League Defensive Player of the Week.

Junior Eric Johnson has been one of Lehigh’s most productive wide receivers in his first two seasons in the brown and white. Last week, he was rewarded with his first career touchdown, a 12-yard catch from Dante Perri that gave Lehigh a 14-10 lead late in the second quarter. Johnson led Lehigh with five catches for 64 yards against the Hoyas, including a 30-yarder. The Katy, Texas native had a team-best 28 catches for 279 yards last season.

Richmond visits Bethlehem with a 1-1 record. The Spiders opened with a 34-17 loss to in-state FBS rival Virginia before defeating Saint Francis 31-21 last week in their home opener. Savon Smith rushed for a career-high 128 yards to lead Richmond to his first win. Reece Udinski has taken over as the Spiders’ quarterback and has completed 73 percent of his passes for 410 yards and four touchdowns, with just one interception. Linebacker Tristan Wheeler, a Lehigh Valley native, leads the Spider defense with 31 tackles through two games.

Lehigh and Richmond are meeting for just the third time and it’s the first meeting between the two teams in Bethlehem. The teams first met in the opening round of the 1998 playoffs where the Mountain Hawks rallied for a 24-23 victory. The other meeting came last September in Virginia. Among current CAA members, Lehigh will have only faced Albany (twice), Stony Brook (twice), Elon (never) and Hampton (never), less often than Richmond.

The Mountain Hawks will be back on the road next Saturday when they visit Princeton, the first of two Ivy League opponents on the 2022 schedule. Game time is set for 3 pm from Princeton Stadium as Lehigh looks to defeat Princeton for the first time since 2016.