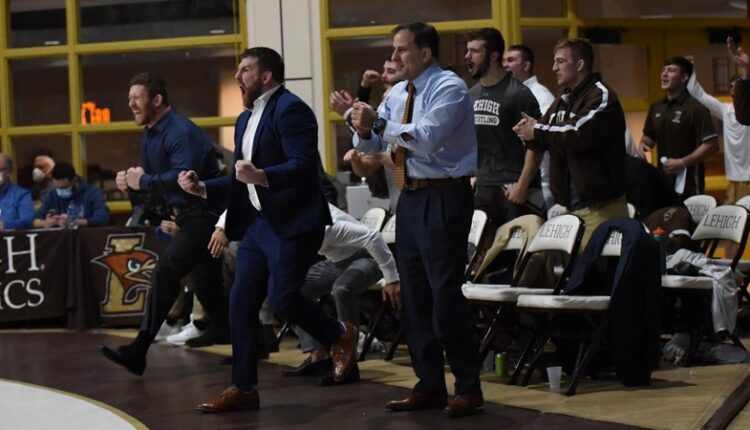 BETHLEHEM, Pa. – The Lehigh wrestling program has announced the addition of 11 student-athletes that will join the Mountain Hawks this summer. The incoming class includes nine first-year student-athletes and a pair of transfers. The two transfers have combined to qualify for five NCAA tournaments, bringing home one All-American medal. The nine first-years combined for three state championships, one National Prep title, 13 state placements and 10 National Prep medals.

The incoming class covers virtually every weight class from 125 through 197. Six states are represented in the class with six wrestlers coming from Pennsylvania and California, Colorado, Illinois, Maine and New Jersey also represented among the group.

The class has earned national recognition, with a no. 17 ranking from InterMat.

“We are very excited about our new class coming in,” head coach Pat Santoro said. “It is a good mix of young talent and some very good experienced wrestlers. The energy has been high on South Mountain and they are preparing for a fun year ahead.”

Information on the 11 newcomers can be found below. The newcomers will join a core of returnees that includes nine NCAA qualifiers, three former EIWA champions and one NWCA All-American.

One of two transfers and one of three Malvern Prep alums in the incoming class, Michael Beard comes to Lehigh from Penn State, where he earned All-America honors with a seventh place finish at 197 at the 2021 NCAA Championships. Beard went 18-8 in two seasons competing for the Nittany Lions. In his prep days, Beard was a three-time National Prep Champion and posted a 172-7 record for Malvern Prep, including a 95-0 record over his final two seasons. Beard is no stranger to Grace Hall, having competed in FloWrestling’s Who’s No. 1 event in 2016 and 2017. He comes to Lehigh with three seasons of eligibility remaining.

A four-time New Jersey state qualifier, Remy Brancato comes from Bergen Catholic High School. Brancato was a state runner-up in 2021 and finished seventh in the state in his senior season. He won two district titles and a regional title. Brancato projects at 184 or 197. He won a BCCA title and also placed at the Xcalibur and Powerade tournaments.

Regarded as one of the top recruits in the class of 2022, Ryan Crookham is a three-time Pennsylvania AA state champion. The Hellertown native graduated from nearby Saucon Valley High School. Crookham amassed a 116-3 high school record with 51 falls. He is a three-time district and regional champion. Crookham won his third state title in March and went on to be recognized as the 2022 Lehigh Valley Live Wrestler of the Year as well as the District XI Scholar-Athlete of the Year. The projected 133/141 pounder won a Beast of the East championship when in high school and was the first-ever eighth grader to win a title in the high school division at the prestigious Super 32 tournament.

A projected 125 pounder from West Chester, Pa., Killian Delaney was a four-time PIAA AAA qualifier from West Chester Henderson. Delaney is a two-time place winner who reached the state finals in 2018. He established new school records with 161 career victories and 96 falls. Delaney is a four-time place winner at the King of the Mountain tournament and finished third at the 2020 Escape the Rock.

A native of Berwick, Maine, Kelvin Griffin prepped at The Hill School in Pottstown, Pa. Griffin is a four-time National Prep place winner, highlighted by a runner-up finish as a junior in 2021. He is a Pennsylvania Prep champion, who amassed more than 100 career high school wins. Griffin is ranked in the top 150 overall and top 20 at his weight class by MatScouts. He projects at 141 or 149.

Coming to Lehigh all the way from Selma, California is Kimo Leia, a three-time state qualifier and two-time place winner from Selma High School. Leia owns third and fourth place finishes in California’s one-class system. He is a two-time league champion and won the California Invitational in 2021, which served as the unofficial state championship. Leia projects at 141 and is ranked just outside the top 100 by MatScouts.

Four-time state qualifier and three-time medalist Owen Reinsel comes from Brookville Area High School in northwestern Pennsylvania. Reinsel was a state finalist in 2022 and also owns a pair of fourth place finishes. He is a four-time state qualifier who won four district titles and reached the regional finals four times with one regional title to his credit. Reinsel projects at 133 or 141 and posted a 142-21 high school mark with 74 falls.

Coming to Lehigh as a graduate transfer is Tate Samuelson, a four-time NCAA qualifier from Colorado, who wrestled at the University of Wyoming. Samuelson went 77-37 for the Cowboys at 184 and was a four-time Big 12 place winner. His best season was 2020-21 when he reached the Big 12 finals and went on to earn the No. 10 seeds at the NCAA Championships. Samuelson is a two-time first team Academic Big 12 honoree who earned his degree in economics from Wyoming. Prior to Wyoming he was a two-time Colorado state champion for Castle View.