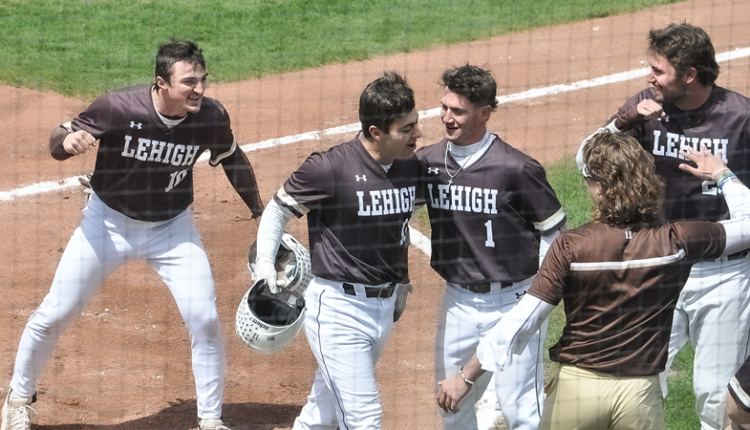 WORCESTER, Mass. – The Lehigh baseball team took care of business in the opener of the doubleheader at Holy Cross Sunday afternoon to clinch a spot in the Patriot League Tournament for the second consecutive season, emerging victorious, 6-4 before falling 8-1 in the regular season finale at Hanover Insurance Park at Fitton Field.

The Mountain Hawks (26-22, 12-13 PL) are the No. 3 seed for the PLT, taking on second-seeded Bucknell in Lewisburg next Saturday in the best-of-three semifinal round.

The offense was led by junior catcher Adam Retzbach, who hit two solo home runs with four hits and two runs scored. He also doubled in the Sunday split. Retzbach took over the Patriot League lead in homers with 11 on the season, two shy of tying the Lehigh single-season program record. Tyler Young went 3-for-5 with two walks, while Jake Whitlinger went 3-for-8 with a double and an RBI.

Retzbach started the four-run second inning with a solo homer to left field in the second inning, giving the Mountain Hawks a 1-0 lead. First-year Sam Holtz registered his second homer of the season, a two-run shot to left field to push the team in front, 3-0. An RBI double for Whitlinger scored Chase Carlson to cap a four-run frame.

Holy Cross scored his first run of the game in the bottom of the second inning on a groundout from Jake McElroy.

Retzbach’s second home run of the game came in the sixth inning to give the Mountain Hawks a 5-1 lead.

The Crusaders added two runs in the sixth inning to make it 5-3 and then Joe Gorla singled through the right side in the seventh, scoring Sweeney to push the lead to 6-3. Holy Cross scored one more in the seventh to make it 6-4 as Casey Rother shut the door to close out the game and clinch the tournament spot.

In the series finale, the Crusaders scored the first six runs of the game to take a 6-0 lead through the first seven frames.

Gerard Sweeney gave Lehigh his first run of the game with an RBI triple to right field, making it 6-1 in favor of Holy Cross.

The Crusaders scored the final two runs of the game to come out on top, 8-1.

Each of the first six batters of the order tallied a hit with Young finishing 3-for-4.

Saturday’s semifinal doubleheader at Bucknell will begin at noon with all three games next weekend streamed live on ESPN+ (subscription required).

A leak? The Supreme Court tipped its hand on abortion long ago | Bruce Ledewitz