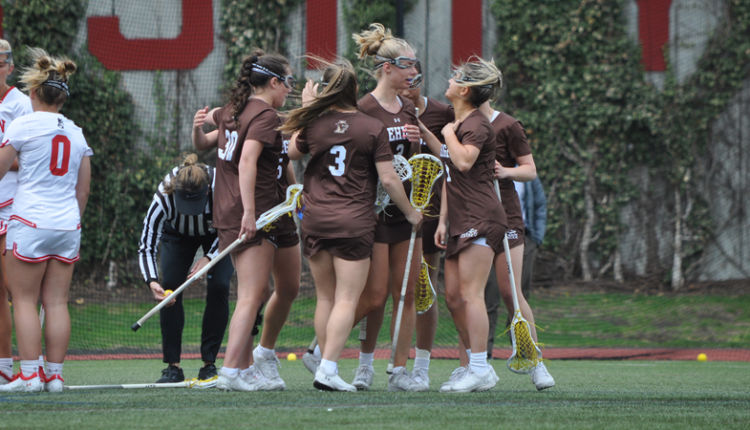 BOSTON – The Lehigh women’s lacrosse team used a 4-0 run to turn a 9-8 deficit into a 12-9 lead, then held off a fourth-quarter Boston University rally to defeat the Terriers, 13-12 on Saturday afternoon. The win marked the Mountain Hawks’ second straight as they improved to 2-3 in Patriot League play (5-7 overall). Senior Nora Giordano led the offense with a career-high five points behind three goals and two assists. Junior Emma Eberhardt also added a hat trick.

Marte made her mark all over the field, causing two turnovers and adding a career-high seven draw controls. Senior Jenna Garden had two groundballs and caused turnover as well.

— Lehigh W Lacrosse (@LehighWLacrosse) April 16, 2022 In a game which saw neither team lead by more than three goals, no one led by more than two the entire first half. Lehigh played from ahead most of the half with early leads of 1-0 and 2-1 (after goals by Marte and Giordano). BU scored with 1:08 left in the first quarter to pull within 5-4 after 15 minutes of play.

The Terriers scored 1:59 into the second quarter, but the Mountain Hawks answered with three of the next four – the final two scored by Giordano – as Lehigh opened an 8-6 lead with 8:14 left in the second quarter. Boston University reeled off three straight to take its first lead at 9-8, but Eberhardt scored a big goal with six seconds left in the half to even the score at nine going into halftime.

Is it a bird? A plane? No, it’s Gabby Schneider who went FLYING across the crease for this highlight-reel (no-look) goal in today’s 13-12 win at BU!

— Lehigh W Lacrosse (@LehighWLacrosse) April 16, 2022 The Mountain Hawks continued the momentum with the first three goals of the second half and four of the first five, to open a 13-10 lead after Memeger’s second with 7:52 on the third-quarter clock.

From there, the teams were scoreless the rest of the stanza. BU scored twice in the fourth – at 14:20 and 10:36. From that point forward, the two goalkeepers stopped all five shots sent their way (three by the Terriers’ Reilly Agres and two by Lehigh junior Hayley Hunt), as the Mountain Hawks held on for the 13-12 victory.

Final shots were 30-28 in favor of Lehigh while the Terriers held a 9-8 edge in groundballs and 19-10 advantage in draw controls. Hunt finished with 10 saves across Agres, who made 11.

Lehigh returns home on Wednesday, hosting Lafayette in The Rivalry presented by Lehigh Valley Orthopedic Institute. Gametime is set for 7 pm on ESPN+.

Hear from senior Nora Giordano following today’s win at Boston University! She finished with a career-high five points in the 13-12 victory. pic.twitter.com/URQRyjmP8w

These are the meaningful actions Pennsylvanians can take this Earth Month