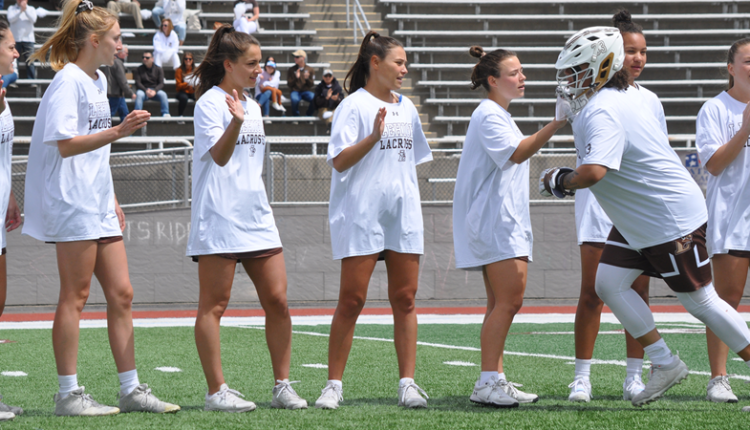 Lehigh to Play at No. 7 Loyola Thursday in Patriot League Semifinals

BETHLEHEM, Pa. – Winners of six of its last seven games, the Lehigh women’s lacrosse team heads to Loyola on Thursday for a 2021 Patriot League Championship Game rematch, as the Mountain Hawks face the No. 7 Greyhounds. Opening draw for the Patriot League Semifinals is set for 3 pm on ESPN+. Thursday will mark Lehigh’s seventh game in 20 days.

Junior Emma Eberhardt tallied a natural hat trick in the first half Sunday, scoring at 6:34 and 0:11 of the first quarter, then 11:07 of the second, to turn a 2-1 Lehigh deficit into a 4-2 lead . The Mountain Hawks wouldn’t trail from there, later using a 4-0 run bridging the second and third quarters to take a 9-4 lead, on the way to the 12-7 victory. Lehigh snapped a five-game losing streak at Colgate, winning in Hamilton for the first time since 2010. It was the Mountain Hawks’ first-ever true road win in Patriot League Tournament history (excluding neutral-site contests).

Eberhardt finished with four goals and an assist, including her third SportsCenter Top 10 play of the season (and the Mountain Hawks’ sixth of the school year), a late goal in the first quarter. Junior Katia Carnevale scored a game-high five goals while senior Nora Giordano tied a career-high five points behind a goal and career-high four assists. Carnevale eclipsed 100 career goals in the process (currently 102).

Defensively, seniors Jenna Garden and Emma McGillis caused two turnovers apiece, each reaching 50 in their careers. Sophomore Cassie Marte had caused two turnovers as well (while adding four draw controls). As a defense, the Mountain Hawks have allowed just 7.5 goals per game over their last five, and have allowed the third fewest goals in the Patriot League this season. Lehigh’s scoring defense (10.71) is 28th in the nation. Sophomore Hayley Hunt had 11 saves at Colgate to reach 204 in her career, which leads the nation. Her save percentage of 55.1 is second nationally. This week, Hunt was named second team All-Patriot League, as was Garden and Carnevale. Juniors Gabby Schneider and Eberhardt were named to the first team. Schneider was also named Academic All-League on Wednesday.

The Mountain Hawks will be making their fifth Patriot League semifinal appearance in the last six tournaments.

Loyola stands no. 7 nationally and owns a 16-1 record entering Thursday’s semifinal contest. The Greyhounds feature all six major postseason Patriot League award winners. Offensive Player of the Year Livy Rosenzweig leads Loyola in goals (54), assists (31) and points (85). Rookie of the Year Georgia Latch is second in points with 56 behind 26 goals and 30 assists. Jillian Wilson leads Loyola in draw controls with 111 while Defensive Player of the Year Katie Detwiler leads the Greyhounds in caused turnovers (18). Goalkeeper of the Year Kaitlyn Larsson owns a 7.94 goals (tops in the Patriot League and third nationally) against average and 50.0 save percentage (second in the league, only behind Mountain Hawks’ sophomore Hayley Hunt). As a team, Loyola is first in the nation in free position percentage (60.6), first in shot percentage (51.3), second in scoring margin (8.94), fourth in scoring defense (7.71) and sixth in scoring offense (16.65).

Loyola leads the all-time series against Lehigh, 15-5, including 10-0 since the Greyhounds joined the Patriot League for the 2014 season. Most recently, Loyola jumped out to a 9-0 lead early in the second quarter during the regular season, but the Mountain Hawks bounced back to outscore Loyola 8-7 the rest of the way. Lehigh has come close on multiple occasions, including a 14-13 overtime loss on Apr. 16, 2016 and 12-11 defeat on Apr. 15, 2017. Last season, the teams played in the Patriot League Championship Game, which saw the Greyhounds wins, 11-6. Loyola jumped out to a 9-3 halftime lead, but the Mountain Hawks battled in the second half and outscored the Greyhounds, 3-2, but it wasn’t enough. The teams first met in 1982, a 5-4 Loyola win. Lehigh won the next meeting (also in 1982), 8-2.

If the Mountain Hawks win on Thursday, they would advance to their second straight Patriot League Championship Game and face the winner of second-seeded Army and third-seeded Navy on Saturday at 2 pm on CBS Sports Network.