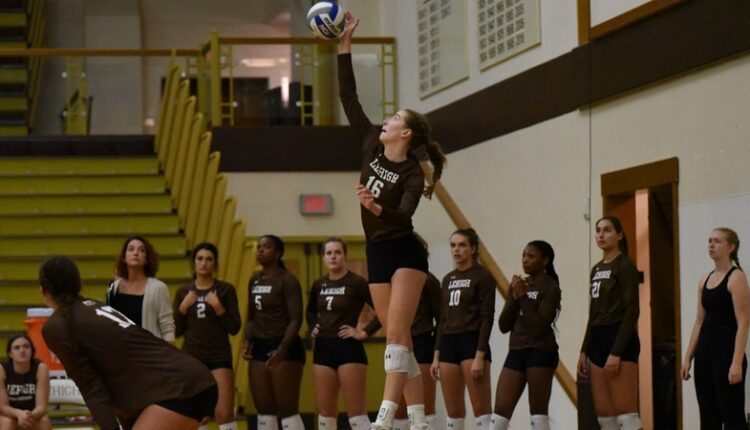 BETHLEHEM, Pa. – Coming off of its second consecutive tournament victory of the season, the Lehigh volleyball team will host Saint Peter’s on Wednesday before hitting the road for the Dartmouth Invitational this weekend.

The Mountain Hawks had some incredible performances during the Steel Classic Tournament last weekend that led to a second tournament trophy for the team this year.

In its first home match of the season, Lehigh opened up the tournament with an afternoon match against Cleveland State. The Mountain Hawks and the Vikings battled throughout the match, taking it to five sets before Cleveland State ultimately handed Lehigh its first loss of the year.

The Mountain Hawks bounced back in their final match of Friday against Buffalo. Lehigh lost the first set 28-26 but showed no signs of backing down. The team went on to win the next three sets to secure its first home win of the season.

Lehigh returned on Saturday with one thing on his mind: another trophy. Rider came out strong, taking the first two sets with ease. The Mountain Hawks entered the third set with intensity and went on to win the final three sets to secure the title of Steel Classic Tournament champions.

Sophomores Megan Schulte and Emily Stewart were named to the All-Tournament team after their impressive performances for the Mountain Hawks last weekend. Schulte finished the weekend with 49 kills while Stewart finished with 31 kills and 20 total blocks. Stewart also hit .500 over the three matches.

Saint Peter’s is currently 0-7 with a recent loss to Binghamton in the CCSU Invitational. First-year Morgan Thurlow currently leads the Peacocks with 39 kills so far this season. The Mountain Hawks are currently 17-4 all-time against Saint Peter’s with their most recent win coming in 2018.

Following Wednesday’s match, Lehigh will travel to Hanover, NH to compete in the Dartmouth Invitational. The Mountain Hawks will kick off competition at 10:30 am against Hartford and will wrap up competition on Friday with a match against Dartmouth at 6:30 pm Lehigh will face Merrimack on Saturday at 3 pm to close out the tournament.

Lehigh and Hartford will meet for the seventh time in series history. The Hawks are currently 0-6 on the season with a most recent loss to Delaware State. Friday’s match against Dartmouth will be the third time both the Mountain Hawks and the Big Green have faced each other. The Mountain Hawks fell to Dartmouth last year during the Steel Classic Tournament.

Saturday’s match against Merrimack will be the first time both programs will meet. The Warriors are 2-2 on the season with wins against Saint Peter’s and Hartford.

All of Lehigh’s matches this week will be streamed on ESPN+ and live stats will be provided for each match.