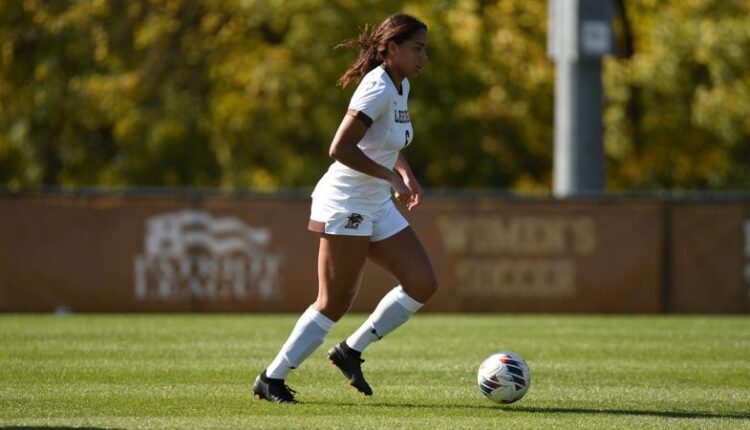 BETHLEHEM, Pa. – Following its fourth-place regular season finish, the Lehigh women’s soccer team will return to Bethlehem to host No. 5 seed Navy on Sunday afternoon. Opening kickoff at the Ulrich Sports Complex is scheduled for 2 pm and the game will be streamed on ESPN+.

The Mountain Hawks wrapped up the regular season at Bucknell on Wednesday night, ending the game with a 1-1 draw against the Bison. Junior Ava Schaller, who was named third team All-Patriot League, scored the Mountain Hawks’ lone goal of the game in the 12th minute. First-year goalkeeper Maggie Ousouljoglou tallied five saves for Lehigh.

Following its final regular season game, Lehigh had five student-athletes named All-Patriot League on top of a major award from the league. Sophomore forward Corinne Lyght was named Patriot League Offensive Player of the Year. Lyght is currently tied for first in goals in the Patriot League with six and leads the Mountain Hawks in goals and points (13).

The Scotch Plains, NJ native was named first team All-Patriot League and was joined by senior Ryelle Shuey. Shuey has a career-high three goals this season for the Mountain Hawks including a game-winner against Holy Cross.

Joining Schaller on third team All-Patriot League was graduate student Erin Keefe and senior Mattie Murphy. Keefe, who received all-league honors for the third time in her career, has played a huge role in the Lehigh defense and scored her first collegiate goal against St. John’s earlier this season.

Murphy has two goals and three assists for the Mountain Hawks so far this season. The Apex, NC native scored her second goal of the season against Navy, where Lehigh defeated the Midshipmen 2-0 at the Ulrich Sports Complex earlier this season.

Navy is 2-0 all-time against Lehigh in the Patriot League Tournament, with its most recent tournament win occurring in 2012 in Annapolis, Md.

The Midshipmen are 8-7-3 overall and 4-5 in league play so far this season. Navy closed out the regular season with a 1-0 victory over Lafayette on Oct. 26. Sophomore forward Amanda Graziano was named second team all-league while junior goalkeeper Mattie Gallagher, junior midfielder Jenna Daunt and sophomore forward Alexa Riddle were all named third team all-league for Navy.

Daunt and first-year forward Isabella Romano lead the Midshipmen with three goals this season. Graziano has two goals and leads Navy with three assists. Gallager leads the Patriot League with 85 saves this season.

If the Mountain Hawks win on Sunday, they would advance to the semifinals on Thursday, Nov. 3 at either No. 1 seed Army West Point or No. 2 seeds Bucknell. The lowest remaining seed from the quarterfinals will play the Black Knights while the highest remaining seed will face the Bison.