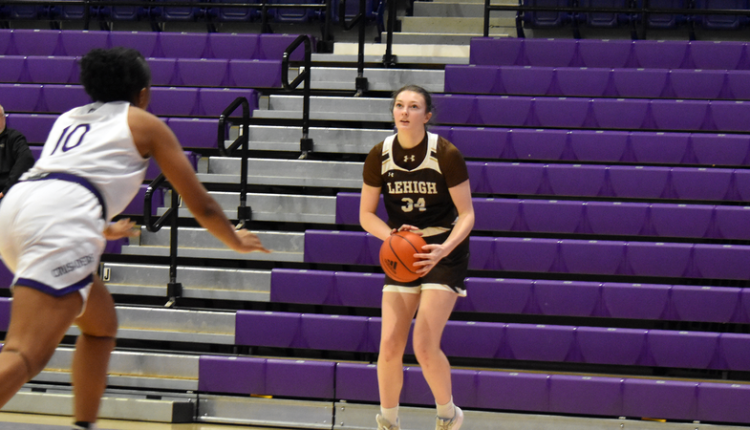 BETHLEHEM, Pa. – The Lehigh women’s basketball team returns home for the first time in more than a week when the Mountain Hawks host Loyola (Md.) Wednesday at 6 pm

The Mountain Hawks are coming off of a hard-fought victory over American, defeating the Eagles 79-77. It was a game that came down to the wire. American had two opportunities to hit a game-tying shot, but it would not fall. Lehigh overcame an 11-point first-half deficit and then held off the Eagles after taking the lead in the fourth.

Lehigh comes into Wednesday’s game in fourth place in the Patriot League. The Mountain Hawks are 8-9 (4-2 PL). Loyola 7-10 (2-4 PL) was defeated by Navy on Jan. 14, which was also the first win of the season for the Midshipmen. The Greyhounds have lost their last three league games.

Senior Frannie Hottinger made history on Monday, setting a program record of five Patriot League Players of the Week honorees in a week. She’s leading the league in scoring, averaging 20.9 points per game.

Ella Stemmer, who made her third-ever start against American, was just one point shy of finishing in double digits. Jamie Behar has been impressive recently. Behar scored 11 points against American and played a career-high 25 minutes. Kramer also finished in double-figures against the Eagles after missing the Holy Cross game. She notched 15 points.

Taleah Dixon and Lex Therien are leading the way for Loyola. Dixon is third in the league in scoring (14.4 points per game). She sits behind Hottinger and Kramer. Therien is averaging 13.4 points per game.

Wednesday’s game will be broadcast on Service Electric Network and ESPN+.

Animals should be treated with care, not cruelty | Opinion