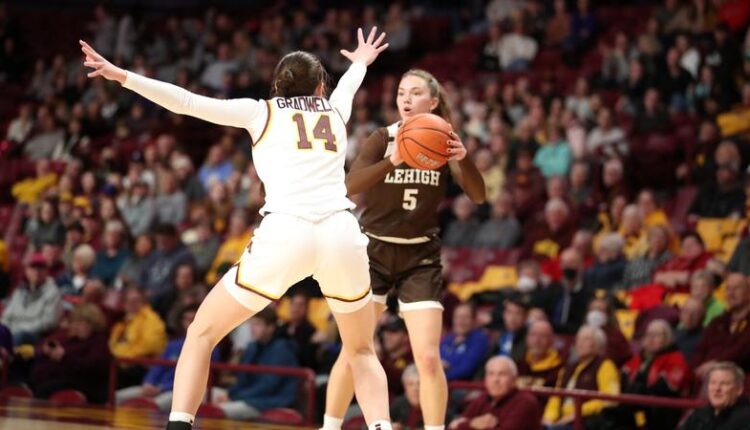 BETHLEHEM, Pa.- After a hard-fought two-game road trip, the Lehigh women’s basketball team returns to its home court on Friday against Bloomsburg at 7 pm at Stabler Arena.

The Mountain Hawks are 4-0 against the Huskies. Lehigh last played Bloomsburg in 2019, where the Mountain Hawks rolled to a 91-49 victory, which is tied for the third largest margin of victory in program history.

Frannie Hottinger, who was just a first-year in 2019, scored 16 points, which was a career-high for the senior wing at the time. Senior guard Anna Harvey also recorded three steals and two points in that game.

Hottinger continues to lead the Mountain Hawks this season. She has already recorded two double-doubles and is averaging 23.7 points. Hottinger was also named Patriot League Player of the Week on Monday.

Mackenzie Kramer is closely behind Hottinger. The junior guard is averaging 20 points per game. Kramer recorded the first double-double with points and assists since 2011 against Minnesota after finishing with 26 and 11.

Meghan O’Brien is coming off a career-high game against the Golden Gophers. She scored 14 points. Kaylee Van Eps also had 14 points in that game.

Lehigh comes into this game with a 1-2 record. Bloomsburg is 1-0 after defeating Chestnut Hill 70-69 in its season opener. Bloomsburg’s Ella Kale and Katelin Starr both had 14 points in that game.

Tickets to Friday night’s game can be purchased at LehighTickets.com or by visiting the Stabler Arena box office prior to tip off.