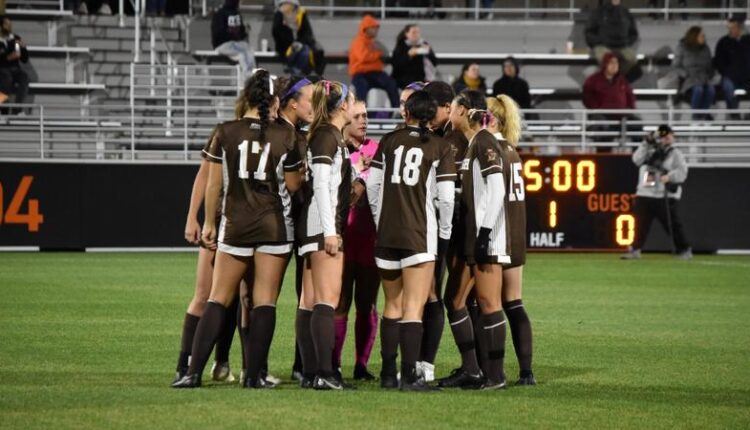 BETHLEHEM, Pa. – Coming off of its final non-league game of the season at Princeton on Tuesday, the Lehigh women’s soccer team will return to Bethlehem for its final home game of the regular season. The Mountain Hawks will host American at the Ulrich Sports Complex at 6 pm on Saturday evening. Lehigh’s six-member senior class will be honored prior to their final game in Bethlehem.

Last time out, the Mountain Hawks traveled to Princeton to take on the Tigers at Myslik Field at Roberts Stadium. Lehigh and Princeton spent the first 15 minutes of the game battling for possession before the Tigers scored the first goal of the game in the 17th minute.

Princeton scored his second goal of the game in the 37th minute to extend his lead to 2-0. Lehigh added three shots within the first 45 minutes of play but were unable to find the back of the net.

Just seven minutes into the second half, sophomore Corinne Lyght put up her second shot of the game, sending the ball just above the net. Just five minutes later, Lehigh had a second opportunity to score off a free kick from senior Mattie Murphy. Murphy took the free kick from just outside of the 18-yard box, missing the net and leaving the score at 2-0.

The Mountain Hawks have an overall record of 6-6-2 and a league record of 4-2-1 so far this season. Lehigh currently sits in fourth-place with 13 points following his 4-2 victory over Loyola last Saturday. A win or draw against the Eagles will clinch a berth in the Patriot League tournament for the Mountain Hawks.

American is 2-5-6 overall this season and currently sits in eighth place in the Patriot League with a 1-4-2 record. The Eagles defeated Colgate 2-0 on Oct. 16 and tied both Lafayette and Holy Cross this season.

Senior Alyssa Vazquez and junior Izzy Kadzban lead the Eagles with two goals this season. Goalkeeper Julia Kato has 46 saves in net for American so far this season.

The Eagles lead the Mountain Hawks 12-11-1 in the series. Lehigh has defeated American in the last two meetings with a most recent 2-1 win in Washington DC last season.

Lehigh will wrap up the regular season on Wednesday, Oct. 26 against Bucknell in Lewisburg, Pa. Action will begin at 7 pm and the game will be streamed on ESPN+.