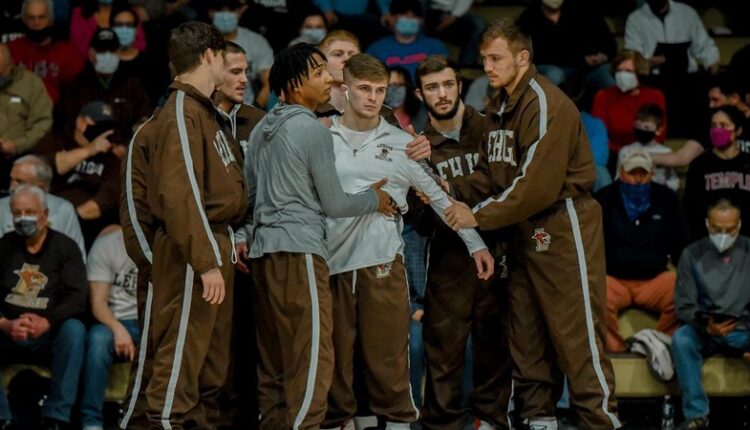 BETHLEHEM, Pa. – Lehigh joins the other 16 EIWA member institutions in Ithaca, NY this Saturday and Sunday for the 118th EIWA Championships as Cornell hosts for the first time since 2003. The EIWA is the nation’s oldest wrestling conference, with Lehigh being the historically dominant team. The Mountain Hawks won the last four team titles and a league-best 38 overall. Lehigh also has a league-leading 224 individual titles. The Mountain Hawks finished the dual meet season at 9-9 after their season-ending dual at No. 13 Arizona State came down to overtime in the final bout with the Sun Devils prevailing 21-17. Lehigh’s lineup features six wrestlers with previous EIWA Tournament experience, including three returning champions: Malyke Hines (133), Josh Humphreys (157) and Jordan Wood (285). Also at stake are 42 automatic berths to the NCAA Championships in Detroit.

Six Lehigh wrestlers appear in the latest rankings by both InterMat and FloWrestling, while three wrestlers are ranked by both Amateur Wrestling News and The Open Mat. Senior Jordan Wood leads the way as he is ranked in the top seven by all four outlets. Junior Josh Humphreys and first year Malyke Hines are also ranked by all four outlets, with Humphreys rated in the top 10 by all four. Junior Jaret Lane and sophomore Brian Meyer are ranked by two outlets, while first years Connor McGonagle and Max Brignola both appear in one.

The EIWA received 42 automatic bids to the NCAA Championships when the NCAA announced its qualifier allocations last week. Each qualifying tournament was awarded spots per weight class based on current year data including Division I winning percentage, RPI and a coaches ranking. Wrestlers who fail to qualify this weekend will be eligible for one of 43 at-large berths which will be announced on Tuesday, March 8.

Lehigh’s regular season finale at No. 13 Arizona State came down to overtime in the final bout, with second-ranked Cohlton Schultz’s 4-2 tiebreaker win over seventh-ranked Jordan Wood giving the Sun Devils a 21-17 victory Feb. 19 in Tempe, Ariz. Trailing 14-3 at intermission, the Mountain Hawks stormed back with three consecutive wins, including a technical fall and a fall, to take a 17-14 lead with two bouts remaining. Arizona State went back in front with a win at 197 and clinched the dual at 285. Senior Dan Moran put Lehigh on the board with a win at 141. Brian Meyer knocked off sixth-ranked Anthony Valencia 6-1 and was followed by Jake Logan’s first career bonus win, a technical fall at 174 and AJ Burkhart’s first pin of the season at 184. Meyer was recognized as the EIWA Co-Wrestler of the Week for beating his second top 10 foe this season.

Junior Josh Humphreys missed the entire 2020-21 season due to injury but came back in a big way, going 14-2 at 157. Humphreys’ nine bonus wins are the most among Lehigh’s EIWA Tournament entrants and includes three falls, two technical falls and four major decisions. He opened his season with two bonus wins at Oregon State and went 3-0 with three bonus wins over ranked opponents at the Collegiate Wrestling Duals to earn EIWA Wrestler of the Week honors. The Parkersburg, W.Va., native won EIWA titles as a true freshman in 2019 and a sophomore in 2020 and was a NWCA first team All-American in 2020. He also won the Coaches’ Trophy in 2020 as the EIWA Tournament’s Outstanding Wrestler . Humphreys has won 28 of his last 31 bouts dating back to the 2019-20 season.

Competing in his final home dual, sixth-year senior Jordan Wood capped his Grace Hall career with a 57 second fall against Bucknell. The heavyweight came out of a planned Olympic redshirt in January 2021 and went 9-3 last season. He won his fourth straight individual EIWA championship at 285, becoming Lehigh’s fifth four-time EIWA champion (and first since 1983) and the first heavyweight to win four EIWA titles. Wood is a two-time All-American, finishing fourth in 2019 and earning second team honors in 2020. The Gilbertsville, Pa., native finished the regular season at 18-2 and owns a 91-22 career record. This year, Wood has a chance to become the first five-time EIWA champion in conference history.

A league-leading 224 individual EIWA titles have been won by 138 Lehigh wrestlers. Last year, senior heavyweight Jordan Wood became the fifth Lehigh wrestler to win four individual EIWA titles and the first brown and white wrestler to win all four titles at the same weight class. Wood became the 13th four-time EIWA champion and the first heavyweight to accomplish the feat. He will bid to become the first-ever five-time EIWA champion this weekend.

Six of the ten Mountain Hawks expected to compete in the EIWA Tournament have competed in the tournament before. Senior Jordan Wood is a four-time champion bidding for his fifth title. Junior Josh Humphreys is looking to win his third. First year Malyke Hines is looking to win his second straight title. Sophomore Brian Meyer has competed in the last two tournaments, while first years Connor McGonagle and Jake Logan made their EIWA debuts in 2021.

Lehigh has been well represented among the three major EIWA Tournament individual awards in recent years. Four years ago, Lehigh swept the major awards with Ryan Preisch winning the Coaches’ Trophy (Outstanding Wrestler) and the Sheridan Award (Most Falls in the Championship Bracket) and Darian Cruz capturing the Fletcher Trophy (EIWA Tournament Career Team Points Scored). Three years ago, Preisch won the Fletcher Trophy, while freshman Josh Humphreys won the Sheridan Award. In 2020, Humphreys picked up another major award, capturing the Coaches’ Trophy after winning a stacked bracket at 157. Last year, Jake Jakobsen (Sheridan) and Jordan Wood (Fletcher) took home major awards. Lehigh wrestlers top the lists in terms of all three major awards. Fourteen Lehigh wrestlers have won the Sheridan Award since 1964, including 10 of the last 19. Twenty-one Lehigh wrestlers have won the Fletcher Award since 1955 including three of the last four. Wood will win the Fletcher Award again if he wins his fifth heavyweight title. Twenty have won the Coaches’ Trophy, dating back to 1936, with Preisch and Humphreys the first Lehigh winners since John Van Doren in 1998.

Tournament pre-seeds were announced Tuesday afternoon. Seeds will be reviewed Friday following a meeting of the league’s head coaches and will be locked in at weigh-ins Saturday morning.

The 118th EIWA Championships will feature two sessions Saturday and two sessions Sunday from Cornell’s Newman Arena in Ithaca, NY Saturday’s first session begins at 11 am while the second session, featuring quarterfinals and two rounds of consolations, begins at 4 pm Wrestling on Sunday begins at 10 am with the championship semifinals and the consolation quarterfinals and semifinals. The finals session, featuring placement matches for first, third, fifth and seventh, will begin at 3 pm and will be preceded by the EIWA Hall of Fame induction ceremony.

The EIWA has once again partnered with FloWrestling to provide streaming video coverage of the entire tournament at FloWrestling.org (subscription required). There will be no Lehigh radio coverage of Sunday’s finals session due to a conflict with the men’s basketball Patriot League semifinal at Colgate.

Lehigh’s NCAA tournament qualifiers will move on to the NCAA Championships, March 17-19 at Little Caesars Arena in Detroit. The NCAA will announce the at-large qualifiers and complete field of 330 on Tuesday, March 8 and will then unveil the seeds and brackets the following day at 6 pm