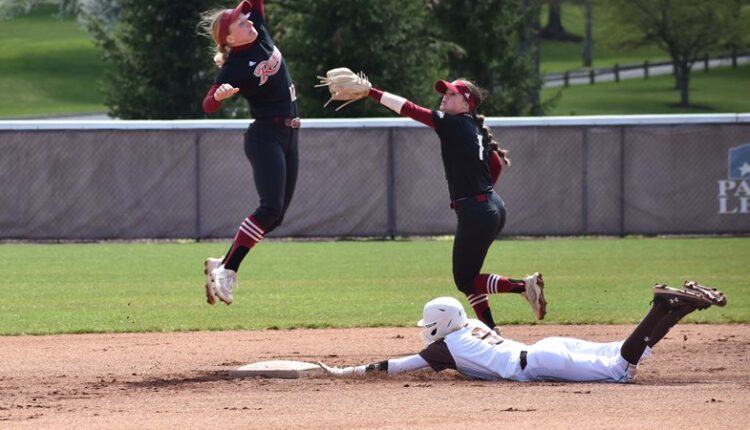 BETHLEHEM, Pa. – Following a loss and a tie Wednesday against Princeton, the Mountain Hawks got back on the winning track Sunday with a doubleheader sweep of Rider at Leadership Park. Lehigh took game one 11-3 in six innings and then held off the Broncs 5-4 to claim the Easter Sunday sweep.

Lehigh’s bats came to life Sunday with 26 hits, including eight extra base hits. Junior Emily Cimino led the way with five hits, while senior Carley Barjaktarovich and sophomore Brooke Cannon both had four hits on the day. The Mountain Hawks improve to 18-13-1 on the season with Sunday’s two victories.

In game one, the Mountain Hawks scored 11 runs on 15 hits and scored in their final five times at bat. Cannon went 3-for-3, while Cimino was 3-for-4.

Lehigh went in front in the second inning when senior Addie Kittel drilled a three-run home run just inside the left field foul pole, her fifth home run of the season. Senior Karsen O’Rourke singled home two runs in the third to give the Mountain Hawks a 5-0 lead after three innings.

Rider (23-15), capitalized on a two-out Lehigh error to plate three runs in the top of the fourth, but Cannon helped limit the damage, throwing Kaitlyn Vazquez out at the plate following a single by Brianna Koonce.

The Mountain Hawks answered with two runs in the home fourth as Cimino doubled home Barjaktarovich and then scored when first-year Rory Dudley reached on an error. Lehigh added three more runs in the fifth on RBI singles by Kittel, junior Josie Charles and Cannon.

In the sixth, first-year Lindsey Martin drew a one-out walk and came around to score the game-ending run when Charles tripled to left center.

Barjaktarovich and Cimino teamed up to manufacture a run in the bottom of the first inning in game two. The senior shortstop led off with an infield single, stole second, took third on a throwing error, and then scored on a sacrifice fly to left off the bat of Cimino.

Rider tied the game at 1-1 in the second when Lani Moreno led off with a double and scored when Vazquez reached on an error.

Lehigh went back in front with two runs in the third as Cimino drew a one out walk and then scored on a double to right center by senior Jaelynn Chesson. Dudley then doubled down the left field line, scoring Chesson to put the Mountain Hawks up 3-1.

Cimino and Chesson teamed up again in the fifth as Cimino led off with a triple to right center before Chesson singled her home. O’Rourke brought home Lehigh’s fifth run with a bases loaded ground out that plated Chesson.

The Broncs pulled back within one run as Olivia Burroughs hit a three-run home run to right center with two outs in the sixth. Sophomore Kaitlyn Young escaped the sixth without any further damage and then worked around a two-out error in the seventh to close out the victory.

Young allowed four runs on five hits to pick up her ninth victory of the season. She struck out nine and did not walk a batter.

The Mountain Hawks’ next five games will be road Patriot League contests. Lehigh heads to Army West Point on Tuesday to complete the suspended game from March 26 and then play the series finale. The Mountain Hawks lead the suspended game 4-3 and will be batting in the top of the fourth inning when play resumes. Next weekend, Lehigh will play a three-game Patriot League series at Bucknell.

Jackie Robinson was a radical. Don’t listen to the sanitized version of history | Opinion