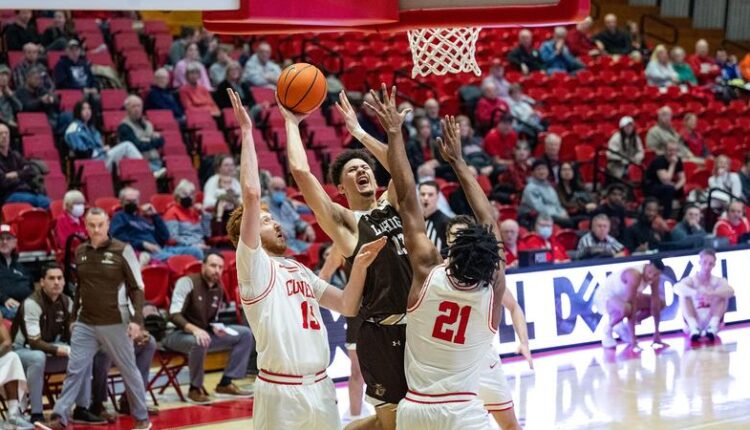 ITHACA, NY – The Lehigh men’s basketball team struggled to get in the groove offensively, falling to Cornell 96-64 inside of Newman Arena at Bartels Hall on Tuesday evening.

The Mountain Hawks (5-6) suffer their fifth loss on the road and drop the first meeting between the two programs since 2011, as the Big Red (8-3) remain undefeated inside the Newman Arena.

6:53 – 1st! Taylor slashes into the paint and spins around a defender for an easy basket. Lehigh trails the Big Red 29-12. #GoLehigh

In the second half, Cornell extended its lead to 33 points on several occasions, with its largest lead of 34 points, to keep a sizable margin ahead of Lehigh. Sophomore Keith Higgins Jr. recorded 14 of his season-high 21 points in the second half, but it was not enough as the Big Red claimed a 96-64 victory.

Higgins Jr. led the Mountain Hawks in scoring, steals and assists with 21 points, two steals and three assists. This is the seventh game that Higgins Jr. has reached double-digits and the first 20-point performance of the year.

After a turnover, Higgins Jr. DENIES Cornell from an easy bucket. #GoLehigh #PLTop3

Seniors Jakob Alamudun and Evan Taylor also scored in double-figures, with Alamudun reaching a season-high 15 points to go with six rebounds and an assist while Taylor netted 10 points and a team-high eight boards, two assists and a steal. Taylor has now scored 10 or more points in nine games this season.

The Mountain Hawks will open Patriot League play when they travel to Army West Point on Friday, Dec. 30. Tip-off is set for 6 pm and will be broadcast on ESPN+ and Fox Sports Radio 94.7 FM and 1230 AM.

Her Credit Was Ruined by Medical Debt. She’s Been Turned Away From Doctors, Jobs, and Loans

Pittsburgh’s Fern Hollow Bridge to reopen at the end of December, less than a year after collapse