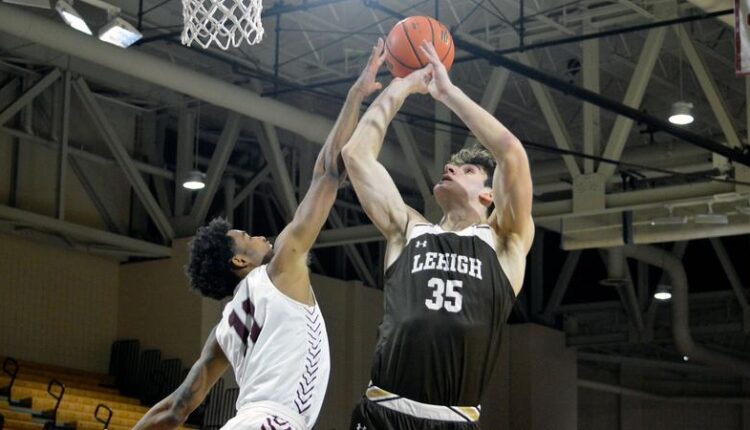 Lehigh is now 4-3 overall this year as the Hawks earn their third win of the season to improve to 3-4. Maryland Eastern Shore leads the series 2-1 and has won back-to-back games, including the first meeting in Maryland.

“It was one of those games that both teams were scrapping, clawing and fighting at each other for a good period of time, but couldn’t get into a flow. In different stages of the game,” commented head coach Dr. Brett Reed. “I thought our defensive hero strong, but they used their athleticism in the second half to get to the rim and got a couple key offensive rebounds and capitalized on our turnovers.”

Lehigh opened the contest with a 7-0 lead before Maryland Eastern Shore scored its first basket and ended tying the contest at 7-7 with 15:21 remaining. The Hawks went ahead by seven points, 20-13, but the Brown and White became to claw back and regained the lead, 23-22, off a pair of free throws from sophomore Tyler Whitney-Sidney. The Hawks scored their final basket of the half with 1:47 left and a bucket from junior Dominic Parolin tied the contest at 27-27, which held until halftime.

The Mountain Hawks made a three-pointer from sophomore Keith Higgins Jr. but that was their only basket made in the first five minutes of the second half. Senior Reed Fenton broke the drought with a trey of his own with 14:40 to play. Whitney-Sidney converted an and-one to tie the game at 36-36 before Maryland Eastern Shore scored the next five points for a 41-36 advantage.

A pair of jump shots put Lehigh back in front 44-43 with under ten minutes to play but Maryland Eastern Shore went on a 13-1 run to extend its lead to 56-45. Parolin threw down a dunk after being led into the lane by Higgins Jr. to break the drought as the Hawks led Lehigh 58-47 with 4:10 to play. The Mountain Hawks worked their way back to one possession, but Maryland Eastern Shore was able to close out the game and snap Lehigh’s win streak.

“The pressure that they play with contributed to our turnovers, whether it sped us up or out of position,” added Reed. “I thought we could have been stronger with the ball and we were careless at times. We showed some fight at times, but we did not play well enough to muster the win.”

Whitney-Sidney led a trio of Mountain Hawks that recorded double-figures with 17 points and team-high nine rebounds. He went 5-for-10 from the field and a perfect 6-for-6 at the free throw line and added two assists and a steal. Higgins finished with 14 points and five boards while going 5-of-11 from the field and 4-for-8 beyond the three-point line with two assists and a steal while Parolin registered 12 points, a steal and one rebound.

Reed noted, “We challenged Dom (Parolin) to go up stronger tonight. That mindset of being more physical and finishing through contact is going to be key for his game continuing to grow.”

First-year Henri Adiassa made his first start for the Brown and White and brought down seven rebounds with two points and a blocked shot. “Henri (Adiassa) was active on the glass and could sense his defensive presence, physical presence and size, made a difference, even if that doesn’t show up in the box score,” stated Reed.

Lehigh out-rebounded Maryland Eastern Shore by one, 36-35, and was unable to come away with the victory.

The Mountain Hawks return back to Stabler Arena on Saturday, Dec. 3 when they host UMBC. Tip-off is scheduled for 2 pm and will be broadcast on ESPN+ and Fox Sports Radio 94.7 FM and 1230 AM.