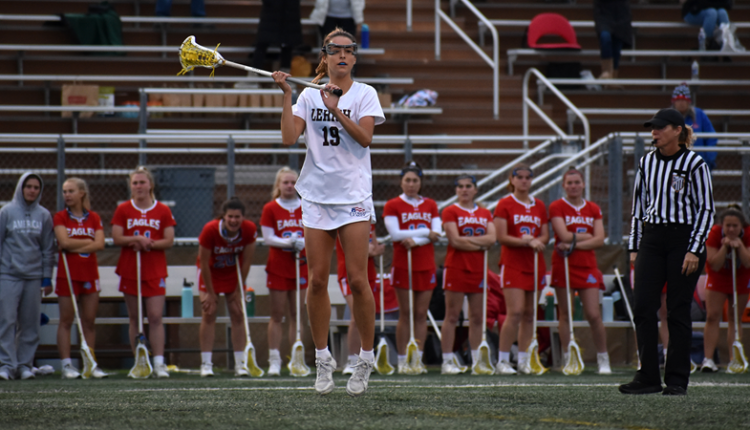 BETHLEHEM, Pa. – Lehigh’s offense came alive when it mattered most, scoring six times in the first 12:05 of the fourth quarter to turn a 6-5 deficit entering the quarter into an 11-7 lead, on the way to a critical 11-9 victory over American on Monday evening at the Ulrich Sports Complex. The Mountain Hawks, who had clinched a Patriot League Tournament berth over the weekend, are now a win away from clinching a home game in the quarterfinals. The winner of Thursday’s regular season finale at Colgate will earn the No. 4 seed in the upcoming Patriot League Tournament.

A low-scoring middle two quarters saw Lehigh net three goals, but the Mountain Hawks’ defense came up big in allowing just four American goals. That set the stage for Lehigh’s six-goal fourth to pull away. Lehigh won its fifth straight Patriot League regular season game for the first time since 2018. The Mountain Hawks’ six home wins are also their most since that same season.

Along with Marte’s two caused turnovers, seniors Emma McGillis and Jenna Garden each caused one, with them recording three and two groundballs, respectively.

A few of the many highlights from tonight’s big 11-9 win over American! 🎥 pic.twitter.com/pO0vtVcGri

— Lehigh W Lacrosse (@LehighWLacrosse) April 26, 2022 American scored first, but the Mountain Hawks answered with the next two – scored by Carnevale and Eberhardt. The Eagles’ Kendall Goldblum answered with her second, with 1:41 left in the first quarter, to even score at two after one quarter of play.

The second quarter saw four combined goals, with Schneider and Giordano netting Lehigh’s goals (at the 11:43 and 2:32 marks). Two American goals were sandwiched in between as the teams went to halftime knotted at four.

Giordano from Meyer (Meyer’s first-career assist) pulls us even 4-4 at the half!

— Lehigh W Lacrosse (@LehighWLacrosse) April 26, 2022 American scored the only two goals of the third until the final minute, when Eberhardt scored her second to pull Lehigh within 6-5 and give the Mountain Hawks momentum heading to the fourth.

Huge goal from Eberhardt to pull Lehigh within 6-5 heading to the fourth!

— Lehigh W Lacrosse (@LehighWLacrosse) April 26, 2022 That momentum carried forward, as Lehigh extended its run to 7-1. That included five in a row to turn a 7-6 deficit into an 11-7 lead. Schneider gave the Mountain Hawks the lead for good with a tough-angle shot near the goal line with the shot clock winding down. That made it 8-7 with 6:30 remaining.

How did you finish that?! 👀

Gabby Schneider from an impossible angle to give the Mountain Hawks the lead!#PLTop3 #SCTop10

Final shots were 26-22 in favor of American while the Eagles held a 16-13 edge in groundballs. Lehigh finished with a 15-9 advantage in draw controls, including 14-5 over the final three quarters. Senior Maggie Kelly played a big role, entering as the draw taker mid-game and finishing with a career-high seven. Eberhardt also recorded seven. Reigning Patriot League Goalkeeper of the Week Hayley Hunt finished with 11 saves, including four in the first and three in the third quarters. American’s Mary Alice Collins made seven saves.

HUGE save by Hayley Hunt to end the first quarter with the score tied 2-2.

— Lehigh W Lacrosse (@LehighWLacrosse) April 25, 2022 The Mountain Hawks will now head to Colgate for the regular season finale on Thursday. Opening draw is set for 4 pm on ESPN+.

Maggie Kelly played a big role in tonight’s huge win, collecting a career-high seven draw controls. We caught up with her after the game! pic.twitter.com/GgkyYkOwKT

Misinformation is deadly. What are we going to do about it? | Kathie Obradovich