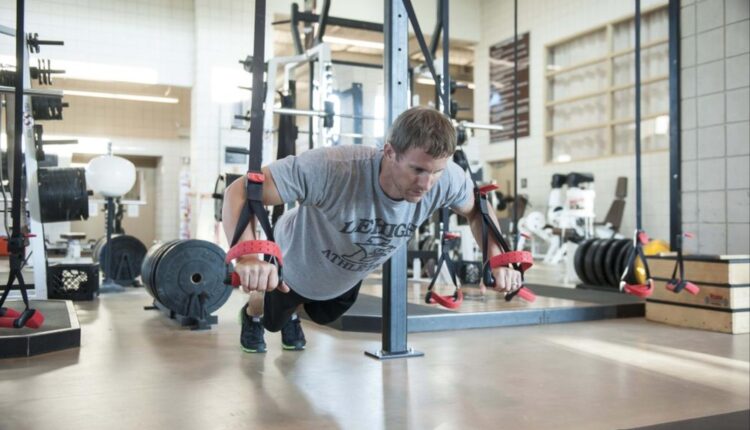 Eric Markovcy, director of sports performance, has been at Lehigh for 19 years, and prides himself on creativity in programming and utilizing all resources for Lehigh athletics.

The sports performance team oversees all 24 of Lehigh’s Division I athletic programs. Markovcy and his staff write up workouts for teams and work with them in the gym and weight room.

Markovcy said he has learned that no athlete or sport is the same each season. Based on that, he said his staff’s programming is always changing.

“The thing that I’m extremely proud of about our programming is that we continue to evolve with the needs of our athletes,” Markovcy said. “In 19 years I’ve never duplicated a program once for the reason that our athletes keep changing. So, we need to evolve relative to their needs.”

The rest of the staff, which includes assistant coaches Dom Carlineo, Dylan Baxter and Owen Breininger, work with the other teams at Lehigh.

Baxter said the staff has to be creative in planning workouts when each team needs to get into the gym with a tight schedule because of academics and team practices.

“It’s controlled chaos,” Baxter said. “If someone from the outside was looking in it would look pretty crazy, but sometimes we could have two or three teams in the weight room at a time.”

Markovcy said the weight room is 4,400 square feet, which can make it difficult to accommodate teams. Because of this, he and the rest of the staff work to stick with a set plan and practice schedule each day to maximize the space.

“It’s a challenge and it’s probably the thing I’m most proud of about our program is that creativity allows us to get all 700 plus athletes in as we need,” Markovcy said. “We use every inch of the weight room and often it looks more like a circus than a weight room.”

Markovcy said the Lehigh Athletics Department’s recent announcement of a renovation and expansion to the Goodman Campus Athletic Complex will help the strength and conditioning program with their need for more space.

Markovcy said the staff is excited about having more space and equipment for all the teams.

“It’s going to be phenomenal and definitely needed because we’ve kind of outgrown ourselves, and it’s a good problem to have,” Markovcy said. “It’s going to allow us to be more efficient, sensitive about times with our athletes and more intimate with our athletes, which will lead to better results and prevent injuries.”

Senior Ethan Hempel, a member of the men’s rowing team, said the expansion will also allow teams to have more of their own space to workout and train.

Hempel said the gym often has teams overlapping with each other.

“A larger facility would allow for teams to have longer lifts and be able to then get other exercises afterwards,” Hempel said.

Markovcy said when teams have the weight room to themselves, it allows for more team bonding and can improve the culture of the team. He said training is not only about getting stronger, but also getting closer with teammates.

Hempel said the weight room is a space where team members can push themselves and others, and this brings out a level of commitment and energy that is hard to find elsewhere.

Markovcy said he and his staff are committed to continuing to improve the student-athlete experience.