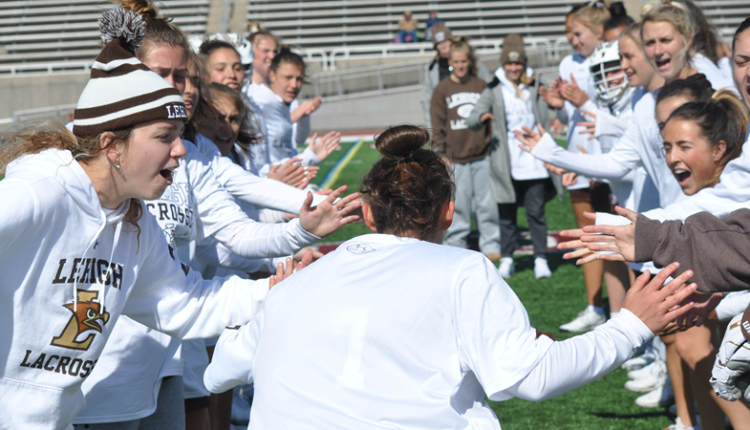 BETHLEHEM, Pa. – Three days after a 10-9 defeat at Colgate in the regular season finale, the Lehigh women’s lacrosse team returns to Hamilton, New York on Sunday for the Patriot League Quarterfinals. Gametime is set for 1pm on ESPN+. Thursday’s game saw the Raiders score the game’s first five and final three goals, with the Mountain Hawks holding a 9-2 edge in between.

Lehigh is making its eighth straight Patriot League Tournament berth, which includes a run to the title game last season. The Mountain Hawks will be vying for the program’s first-ever true road win in the tournament (excluding neutral site). Lehigh is 4-3 all-time in the quarterfinal round – 4-0 at home and 0-3 on the road.

The Mountain Hawks and Raiders finished tied with identical 5-4 Patriot League records, but Colgate earned the tiebreaker with the head-to-head win. Lehigh enters as the No. 5 seed and Colgate as the No. 4 seeds. Colgate jumped out to a 5-0 lead just over six minutes into Thursday’s game, but the Mountain Hawks scored the next six as a Nora Giordano goal at 13:28 of the third quarterback gave Lehigh his first lead at 6-5. Lehigh’s lead reached two at 9-7 early in the fourth, but the Raiders scored three unanswered to walk away winners.

Junior Gabby Schneider finished with a game-high five points via two goals and three assists. The three assists gave her 88 for her career, passing Courtney Henig ’19 for second in program history. Classmate Emma Eberhardt continued her strong playing, scoring three goals and dishing an assist for her fourth straight hat trick and seventh straight multi-goal game. Eberhardt added five draw controls. After Colgate won the game’s first four draws and six of the first seven, the Mountain Hawks won 10 of the final 16 to pull within 12-11 in that category at the final horn.

Defensively, senior Emma McGillis recorded three groundballs and two caused turnovers to move to 48 in her career (like fellow senior defender Jenna Garden). Sophomore Hayley Hunt made eight saves to give her 193 for the season as she continues to stand second nationally in saves (193), save per game (12.06) and save percentage (54.8).

The winner of Sunday’s game will advance to Thursday’s Patriot League Semifinals, hosted by top-seeded Loyola. Lehigh or Colgate will face the host Greyhounds if No. 3 Navy beats No. 6 Americans. If the Eagles win, then Sunday’s winner would face second-seeded Army.

The Raiders won four straight one-goal games – vs. Lafayette (13-12), Holy Cross (16-15), at American (16-15) and against the Mountain Hawks (10-9). despite being held without a point Thursday, Kyra Lucey leads the team with 38 points via 20 goals and 18 assists. Eliza Soutter owns 37 points (26 goals, 11 assists) while Cara O’Reilly has 32 (26 goals, six assists) and Devon Maillet owns 30 (23 goals, seven assists). O’Reilly also leads Colgate in draw controls (110) while Margaret Noble has caused 12 turnovers to lead the team. Mia Hartung and goalkeeper Kieran Gerow leads the Raiders in groundballs (25). Three different goalkeepers have seen significant time, led by Amelia Cunningham, who owns a 14.44 goals against average and 42.0 save percentage in 361:37. Olivia Lynch has started every game in Colgate’s four-game winning streak; for the season, she’s recorded a 12.52 goals against average and 50.4 save percentage.

As he heads for the exit, Philly schools chief Hite reflects on his 10-year tenure