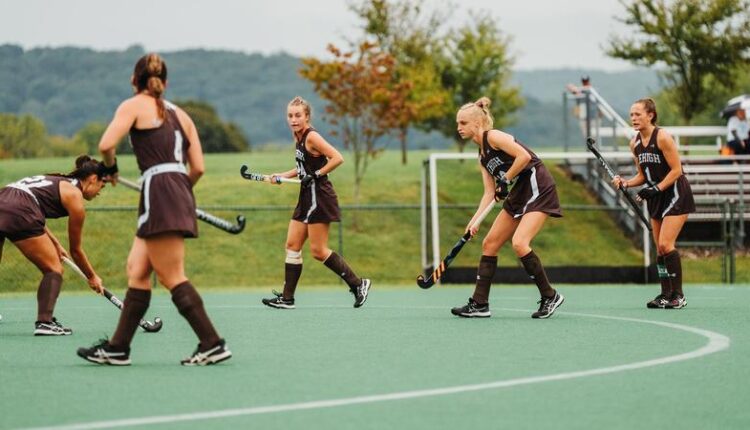 Lehigh Set for a Pair of Road Matches this Weekend

BETHLEHEM, Pa. – The Lehigh field hockey team hits the road for the final time of this season with a couple of matches this weekend. First, the Mountain Hawks take on American in Patriot League action Friday in Washington, DC, starting at 3 pm followed by a non-league contest versus Longwood Sunday at 11 am in Farmville, Va.

On Saturday, Lehigh (8-5, 2-1 Patriot League) defeated Bucknell in overtime to give Lehigh its sixth straight victory, the program’s longest winning streak since 1986, and handed Bucknell its first league loss of the year. First-year Kiki Mes got the Mountain Hawks on the board first with a goal in the second quarter to take a 1-0 lead. Senior Sydney White then gave Lehigh a 2-0 lead in the third quarter beating the Bison goalkeeper off a pass from Mes.

Bucknell did not go away quietly, storming back to tie the match and force overtime. The Mountain Hawks earned a penalty corner 36 seconds into the overtime period where White ripped a shot into the back of the goal to lift Lehigh over Bucknell, 3-2. Senior Maddie Kahn recorded four saves in the win..

White and Kahn were also selected as Patriot League Players of the Week, for their performances last week. White, this week’s Offensive Player of the Week, scored two goals on two shots in the Mountain Hawks victory over Bucknell. This is the first time this season that White has captured a Patriot League honor and the first as the Offensive Player of the Week. The game-winning goal was the third of the year and the sixth of her career.

Kahn, named the goalkeeper of the week for the first time this year, posted a 2-0 mark this past week to improve her record to 8-5 overall this season. She totaled 10 saves between the two matches and a save percentage of .762. In the 2-1 overtime win versus Villanova, Kahn recorded six saves in the eight shots on goal and a save percentage of .857. She then made four saves on six shots which gave Lehigh a 3-2 victory over Bucknell.

Senior Sarah Bonthuis leads Lehigh in scoring with eight goals and seven assists, followed by junior Abbie Brown’s seven goals. Eight other Mountain Hawks have registered at least one goal of the year. Kahn enters the weekend with a 2.29 goals-against average and a .716 save percentage in 13 starts.

American (6-6, 2-2 Patriot League) hosts Lehigh on Friday afternoon and enters the match on a three-game losing streak, most recently falling to Holy Cross, 1-0, on the road on Sunday afternoon in Patriot League play . Sophomore Federica Turino Dellamaggiore leads the squad with eight goals and co-leader in assists with three for 19 points and senior Charllene Boshoff has netted seven goals on the year with 14 points. Junior goalkeeper Bryn Underwood recorded seven saves, in the loss to Holy Cross last weekend. She enters the match with a 1.33 goals-against average and 72 saves in the 12 matches she started.

Sophomore Maroussia Walckiers and senior Floor Schouten lead the Lancers in scoring, both contributing three goals apiece. Walckiers added three assists for a team-leading nine points as Schouten has seven points, which is the same as graduate student Sophia Loscher, who contributed three assists and two goals this season. Sophomore Lara Van Nunen has made all 12 starts in goal this season, recording 51 saves for a .638 save percentage and is allowing 2.34 goals a match.

Next weekend, the Mountain Hawks have only one contest, as they host Holy Cross in Patriot League action on Saturday, Oct. 22. The match is scheduled to begin at 11 am at Ulrich Field in Bethlehem.