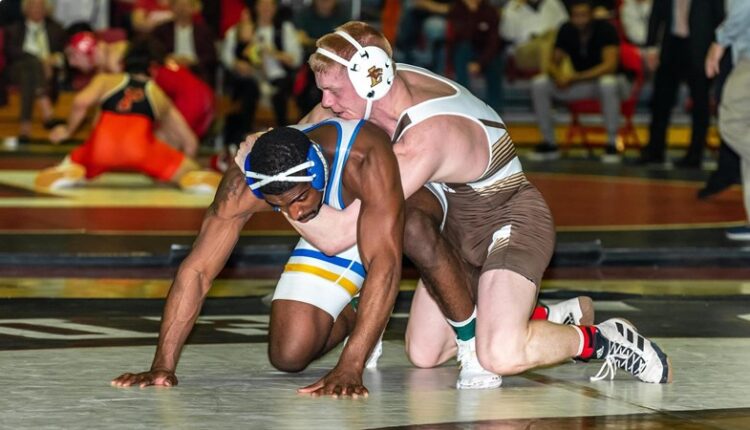 BETHLEHEM, Pa. – Lehigh qualified seven wrestlers for the 91st NCAA Championships, Mar. 17-19 at Little Caesars Arena in Detroit. The Mountain Hawks saw their streak of consecutive EIWA team titles end at four earlier this month at Cornell, but Lehigh crowned at least one individual champion for the 23rd straight year and placed eight wrestlers on the podium.

Senior Jordan Wood led the way, becoming the first wrestler to win five individual EIWA titles with his triumph at 285. Wood will now bid for a third All-America honor as the No. 6 seeds. Junior Josh Humphreys is the No. 7 seed at 157 and is looking to earn his first All-America medal on the mat, after earning first team NWCA honors in 2020.

Lehigh had an 11-year streak with at least one All-American coming to an end in St. Louis last year. The Mountain Hawks will be looking to get back into the top 10 for the first time since 2012 after finishing in the teens six times between 2014-2019.

With his triumph at 285 at the EIWA Championships, sixth-year senior Jordan Wood became the first wrestler to win five individual EIWA championships. Wood owns a 22-2 record in his senior season and carries a 95-22 overall mark into the NCAA Tournament. He is seeking his third All-America honor, having finished fourth in 2019 and earning second team honors in 2020. Wood came out of a planned Olympic redshirt in January 2021 and went 9-3 last season. He won his fourth straight individual EIWA championship at 285, becoming Lehigh’s fifth four-time EIWA champion (and first since 1983) and the first heavyweight to win four EIWA titles. At the EIWA Championships, Wood won the Fletcher Trophy, given to the wrestler who scores the most career team points at the EIWA Tournament, for the second straight year.

Junior Josh Humphreys missed the entire 2020-21 season due to injury but came back in a big way, going 18-3 at 157. Humphreys’ 12 bonus wins are the most among Lehigh’s postseason entrants and includes four falls, three technical falls and five major decisions. He opened his season with two bonus wins at Oregon State and went 3-0 with three bonus wins over ranked opponents at the Collegiate Wrestling Duals to earn EIWA Wrestler of the Week honors. The Parkersburg, W.Va., native won EIWA titles as a true freshman in 2019 and a sophomore in 2020 and was a NWCA first team All-American in 2020. He also won the Coaches’ Trophy in 2020 as the EIWA Tournament’s Outstanding Wrestler . Humphreys finished third at the EIWA Championships and earned the No. 7 seed at NCAA’s. He reached the round of 12 in his first trip to nationals in 2019.

Hines will be the first Mountain Hawk on the mats Thursday as he will face No. 6 Dylan Ragusin of Michigan in a first round bout at 133.

Lehigh has the sixth most NCAA Champions (28) and the eighth most All-Americans (158) of all Division I wrestling programs. The Brown and White have never won the NCAA Team Championship, coming as close as second in 1939, third in 1965, 1979 and a tie for third in 2004.

The 91st NCAA Championships get underway Thursday at 12 pm from Little Caesars Arena in Detroit. The opening round will feature pigtail rounds and preliminaries. The three-day tournament concludes Saturday with the national finals set for 7 pm Information on ESPN’s expansive TV/video streaming coverage is listed below. Every match on every mat will be available on the ESPN Family of Networks and ESPN3/the ESPN App. There will be no Lehigh streaming audio coverage this year.