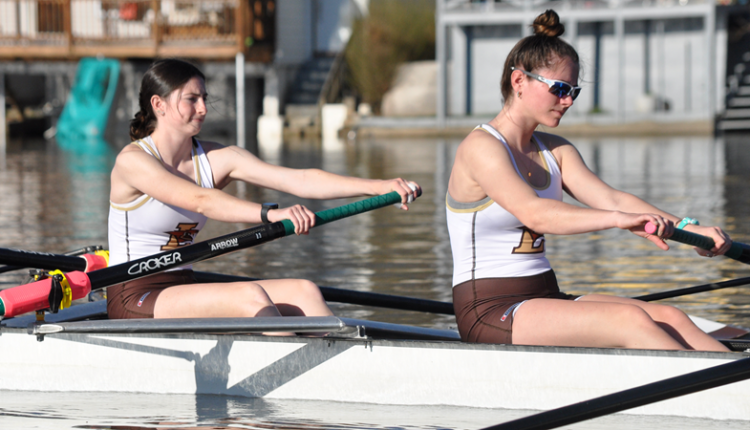 BETHLEHEM, Pa. – Following a weekend with no regattas, the Lehigh rowing team hits the water on Saturday, with the women traveling to Colgate to face the host Raiders, Marist and Canisius while the men take part in the Kerr Cup. Racing for the women kicks off at 11 am while the Kerr Cup begins at 10 am

“We’ve had our ups and downs this season in terms of being able to perform on race day, but I think we’re starting to come together a little bit more each and every week,” said Lehigh head coach Brian Conley. “On the women’s side, I’m excited to see what happens this weekend going against our Patriot League competitor Colgate, and Marist was at NCAAs last year. On the men’s side, they’re going to be racing some pretty fast crews this weekend . It’s going to be a true test of their speed.”

“The men showed some great speed at Murphy Cup, so I think they’ve been pretty consistent in practice with what they’re trying to do,” said Conley. “This weekend, they’re going against Yale, who is ranked number one in the country, and Drexel is ranked pretty high too. If they can hold onto them just a little bit, I think that’s going to put them in a great position for the MARC (Mid-Atlantic Rowing Championships).”

For the women, Saturday will be a great opportunity to square off with a Patriot League foe in Colgate. The Mountain Hawks enter the weekend with the same goal in mind as any regatta… win.

“That’s what we try to do every time we go out and put our oars in the water,” said Conley. “I don’t know where we’re going to be simply because we’re still developing some speed. At this point of the season is usually when we find most of our speed. Colgate just got on the water a few weeks ago, so they’re still finding some speed. This is going to be a test for us to see where we are.”

Coach Conley previews the weekend ahead – women at Colgate and men at the Kerr Cup. pic.twitter.com/gt32BPiFKc

— Lehigh Rowing (@LehighRowing) April 15, 2022 The MARC Championships are quickly approaching on May 1, with the Patriot League Championships 12 days later.

“This is probably one of our biggest and most important weekends,” said Conley. “We are in our last cycle of training. This is where everything starts clicking for the team or doesn’t. We’re hoping we find that rhythm and gel together as a crew.”

Following Saturday, both the women and men head to the Schuylkill River in Philadelphia to face La Salle and Fairfield.

Sheep among the panels: Using solar sites for pastureland