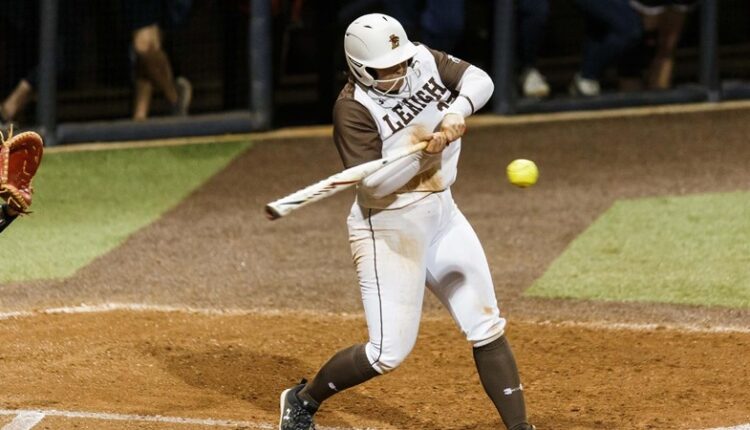 TAMPA, Fla. – Trailing 5-3 heading to the bottom of the sixth, Lehigh exploded for five runs to take the lead, on the way to an 8-5 win over Purdue Thursday in the second of two games on the day against Big Ten opponents at USF Softball Stadium. The Mountain Hawks fell 9-1 to Ohio State in game one Thursday.

Senior Jaelynn Chesson went 4-for-6 over the two games with a home run in each game and three RBIs. Junior Emily Cimino went 2-for-4 against Purdue and drove in four runs. Lehigh is now 5-10 overall with three more games remaining in Florida.

Purdue (14-14) took a 1-0 lead in the top of the first on a leadoff triple and a sacrifice fly, but Lehigh answered in the bottom of the frame as Cimino hit her first home run of the season.

The Boilermakers answered immediately with four runs in the fourth, capped by a three-run home run by Rylee Platusic.

The Mountain Hawks loaded the bases with one out in the bottom of the sixth and Cimino delivered a three-run, bases-clearing double to left center to put Lehigh in front 6-5. Chesson then followed with a two-run home run to the right, her third of the season, to put the Mountain Hawks up three heading into the final frame.

Senior Gabriella Nori worked around a two-out error in the seventh to preserve the victory. Nori earned the win in relief and was charged with a run on two hits with three strikeouts in 3.2 innings. Sophomore Katelyn Young started and was charged with four runs in 3.1 innings of work.

Both teams finished with nine hits. Barjaktarovich, Cimino, Chesson and junior Josie Charles all had two hits for Lehigh.

In its first game of the day against Ohio State, the Mountain Hawks and Buckeyes were scoreless through three innings. Chesson led off the fourth with a solo home run, the 22nd of her career, to account for Lehigh’s offense, but Ohio State answered with five runs in the bottom of the fourth and added two in the fifth and two more in the sixth to end the games

Sam Hackenbracht hit a pair of two-run home runs to pace Ohio State (14-3). Emily Ruck held Lehigh to five hits over six innings with eight strikeouts. Chesson was 2-for-3 to lead the Mountain Hawks against the Buckeyes.

The Mountain Hawks will take on host and No. 23/25-ranked USF Friday at 2 pm The game will be broadcast on ESPN+.

It Was Already Hard to Find Evusheld, a Covid Prevention Therapy. Now It’s Even Harder.