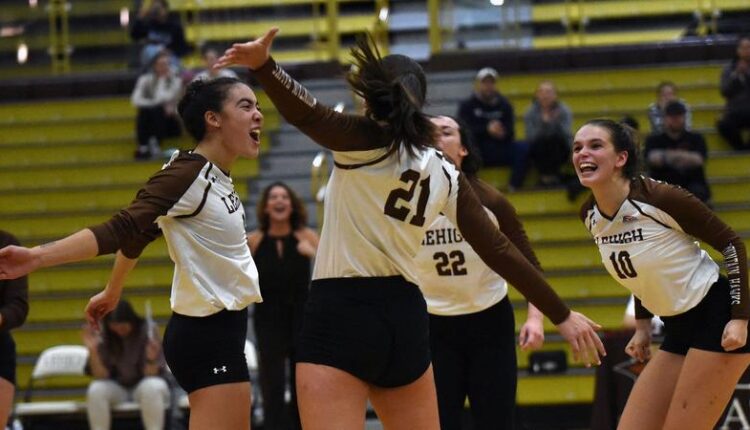 BETHLEHEM, Pa. – The Lehigh volleyball program hosts their final two home matches at Leeman-Turner Arena in Grace Hall this weekend as the Mountain Hawks’ welcome Navy on Friday at 7 pm and American Saturday at 4 pm Both matches will be broadcast on ESPN+.

Lehigh (13-12, 4-9 Patriot League) is coming off a 1-1 weekend on the road. The Mountain Hawks suffered a straight-set sweep at Army West Point before rebounding with a win over Holy Cross at Worcester, Mass.

Sophomore Megan Schulte, the team-leader in kills (275), finished last weekend with 15 kills, three digs, two service aces, a block and an assist while first-year Natalie Luscomb, who ranks second in kills (209) recorded 16 kills in two matches’ last weekend to go with five blocks and four digs. Sophomore Emily Stewart contributed 11 kills between both matches, with eight coming versus Holy Cross, to go with eight blocks and four digs. Junior Katarina Kaburov tallied 11 kills and 11 digs in the win over Holy Cross to end the weekend with 15 digs, two service aces and two blocks.

Sophomore Makena Smith, who leads the Mountain Hawks in assists (816), tallied 58 assists last weekend, with 37 in the victory against Holy Cross. She added 17 digs, seven kills, three service aces and three blocks. Sophomore Kyleigh Brown contributed 30 digs for Lehigh during the two matches, which brings her to 206 on the year.

Navy (12-10, 9-4 Patriot League) is coming into Friday’s contest after splitting a pair of league matches last week. The Midshipmen posted a 3-0 sweep over Holy Cross, then fell to Loyola (Md.) 3-1. Navy will take on Lafayette the following day to close the weekend.

The Midshipmen are led by juniors Jordan and Jamie Llewellyn, Jordan Llewellyn has 278 kills while her sister Jamie is right behind with 270 kills. Jordan is also second on the team with 30 service aces on the year. Junior Averi Miller paces the Navy offense with 852 assists, averaging 9.91 assists per set, and has 19 service aces. Leading Navy defensively is sophomore Hannah Hoover, who has recorded 312 digs followed by the Llewellyn sisters. Junior Maggie Bodman has posted 87 blocks, eight are solo blocks, while junior Anna Klemeyer has 50 blocks for the Midshipmen.

The Mountain Hawks are searching for their 30th all-time win against Navy. The Midshipmen defeated Lehigh in straight-sets in Annapolis earlier this season.

Lehigh then will host American (12-13, 4-8 Patriot League) on Saturday after the Eagles face off with Bucknell on Friday night. The Eagles will enter the weekend with a five-match losing streak after suffering a straight-set loss to Navy a week ago.

American is led offensively by senior Zeynep Uzen with 292 kills and a 4.06 kills-per-set average while freshman Adelina Berisha has produced 228 kills for the Eagles. Senior Inbal Peleg and sophomore Esma Sipahi are the two setters for American and are crucial in setting up the offense. Peleg has a team-high 479 assists as Sipahi has registered 344 assists. Defensively, graduate student Carlie Fikse has contributed 81 blocks for a team-high, along with her 15 solo blocks while senior Onuchi Ndee is second in blocks for the Eagles with 48.

Lehigh will search for just its eighth victory over American on Saturday afternoon and their first win since November of 2018. In their previous meeting this season, Lehigh suffered a 3-1 loss in Washington, DC

Following this weekend’s action, Lehigh will hit the road to close out its regular season schedule with a Patriot League contest at Colgate on Saturday Nov. 12 on ESPN+