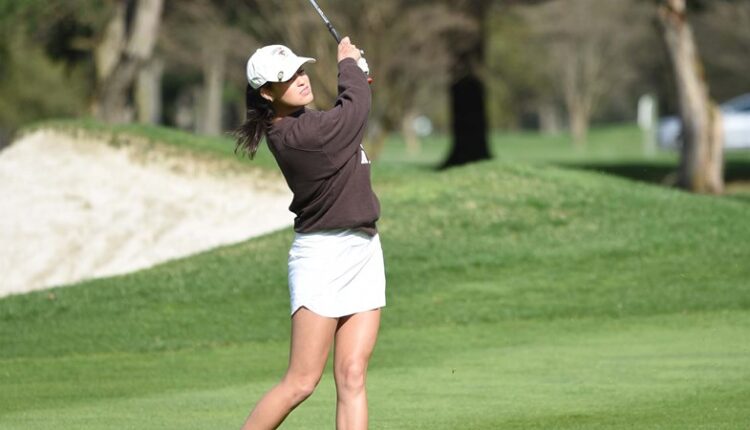 Lehigh, Pineda, Holland Remain In The Hunt After Round Two Of Patriot League Championship

ANNAPOLIS, Md. – A tight battle is shaping up heading into the final day of the Patriot League Championship. After leading the field with a 304 on Friday, Lehigh shot 313 Saturday at the Naval Academy Golf Club. The Mountain Hawks fell to third place overall at 617, but sit just four strokes behind Richmond, which scored 302 Saturday to lead at 613. Boston University shot 301 as a team to move into second place, one stroke behind the Spiders.

Lehigh has three players in the top 10 individually, with sophomore Sophie Holland and first-year Madison Pineda part of a three-way tie for second place at seven over par 151.

Holland delivered the low round of the day for the Mountain Hawks, shooting three over par 75. She was even through 15 holes with two birdies and two bogeys before hitting some trouble over her final three holes.

Pineda was the overall 18-hole leader but found trouble at the start of her round Saturday. She was able to steady the ship with two birdies and eight pars in a 10-hole stretch from No. 6 through No. 15. Pineda finished with a 78 on Saturday. She, Holland and Richmond’s Rory Weinfurther are all tied for second place, one stroke behind the leader Flair Kuan of Boston University.

The third Lehigh player in the top 10 is sophomore Sophia Taverna, who shot 79 Saturday and is tied for eighth place at 156 (77-79). Taverna carded a pair of birdies in her second round.

The Patriot League Championship concludes Sunday with the final 18 holes at the Naval Academy Golf Club. Tee times begin at 8:30 am Lehigh will play with Richmond and Boston University with tee times for those three squads beginning at 9:30 am