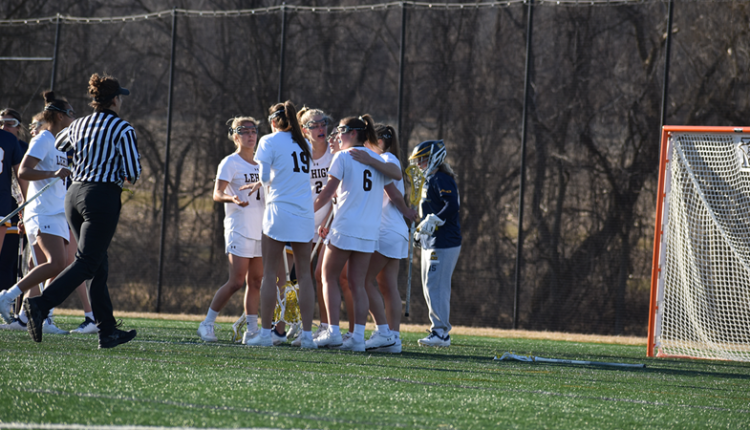 BETHLEHEM, Pa. – Sophomore Hayley Hunt stopped all six shots sent her way in the first half and finished with a career-high 17 saves, as the Lehigh women’s lacrosse team used a 4-0 second-quarter lead to break a 3-3 tie, on the way to a 13-5 win on Wednesday. The run extended to 9-1 in the second half, helping the Mountain Hawks improve to 1-2 on the young season.

As a team, the Mountain Hawks had 11 caused turnovers – led by two apiece from Carnevale and Hunt. Junior Cassie Marte finished with a team-high four draw controls.

Miss today’s win? We have you covered with some of the top highlights in less than a minute. pic.twitter.com/CjfGZ3FEVE

— Lehigh W Lacrosse (@LehighWLacrosse) March 3, 2022 Lehigh outscored La Salle, 3-0 in the first quarter, with goals by Memeger, Giordano and Schneider. The Explorers responded with three goals in the first 2:37 of the second quarter to pull even, but just over a minute later, Memeger scored an unassisted goal to spark a 4-0 Mountain Hawks’ run. Two goals from Carnevale, and Giordano’s second, gave Lehigh a 7-3 halftime lead.

Nora Giordano’s second goal of the game gives Lehigh a 7-3 lead at the half! Hayley Hunt with 11 first-half saves.

— Lehigh W Lacrosse (@LehighWLacrosse) March 2, 2022 La Salle began the second half with a free-position goal 2:10 into the stanza, but the Mountain Hawks wouldn’t allow a goal for the next 19:06, scoring five of their own. Schneider rounded out the scoring with Lehigh’s final three goals.

The Mountain Hawks remain home to host Wagner on Saturday at 12 pm on ESPN+.

We caught up with Hayley Hunt following today’s 13-5 win over La Salle! pic.twitter.com/w6WlM9zsZz