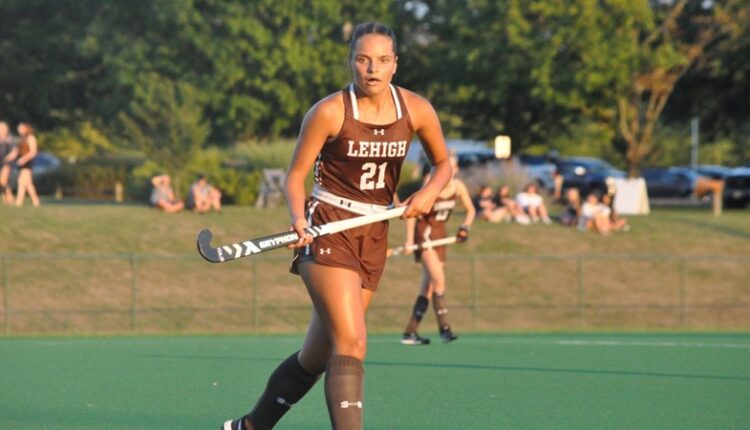 MUNCIE, Ind. – Behind a pair of goals from senior Sarah Bonthuis and junior Julia Gatelein’s first tally of the season, the Lehigh field hockey team picked up its first win of the season as the Mountain Hawks defeated Ball State 3-1 Saturday at the Briner Sports Complex.

The Mountain Hawks scored twice in the third quarter to open up a 3-0 lead and with the victory improve to 1-2 on the season.

“The whole week was spent meeting individually with all the athletes to be able to go over film and to clarify roles,” said head coach Caitlin Dallmeyer. “Unfortunately, being that it’s so early in the season, and having so many starting spots that have opened up due to graduation last year, we have a lot of people competing and there’s yet to be consistency in a lineup yet so every spot is still This week we had people that really worked to win those spots and that resulted in starts for players like MJ Schwab, who earned her first start in her career.

“Many of our team members focused on working better with those around them this week and that work resulted in a great performance today,” Dallmeyer continued. “We played a really great first three quarters. Our last quarter, we got a little shaky and we’ll keep working on that. Overall, the work that we put in this week, with focus, determination and lots of conversations and film resulted in a much better performance today.”

After a scoreless first period, Bonthuis opened the scoring just over two minutes before halftime, scoring her second goal of the season off a feed from sophomore Guusje Hogendoorn.

“Guusje had a role change in positioning and had a lot to do this week to understand her new role and did a great job implementing it and performing the way that we knew she was capable of.”

Gatelein doubled Lehigh’s lead with her first goal of the season on a shot from the top of the circle just over four minutes into the third quarter.

Bonthuis dribbled through several Cardinal defenders and scored her second of the game on a well-placed shot with just under three minutes remaining in the third quarter.

“Sarah is one of our most decorated returning players, that comes with a lot of pressure and we have been demanding a lot of her,” said Dallmeyer. “She’s balancing between two positions right now, depending on the flow and momentum of the game and we have overloaded her with feedback. There are things that we really need her to do to be able to help raise the level of the players around her, which has been a main focus point this week, I am happy she was able to implement that feedback today.”

Lehigh out-shot Ball State 14-8 for the game, including a 12-0 advantage over the second and third quarters. The Mountain Hawks also had a 5-3 edge in penalty corners.

Senior Maddie Kahn made two saves in goal for the Mountain Hawks.

Rachel Bohn scored in the fourth quarter for Ball State, which falls to 1-1.

“I want to shout out our athletes who received really tough feedback this week and were able to receive, implement and execute today with big adjustments in mind,” Dallmeyer said. “Lotte Smorenburg had a phenomenal day, making really big intercepts for us in the backfield which is something that she’s been working hard on.

“MJ Schwab had a really impressive performance on the press and Julia Gatelein was absolutely phenomenal in running the entire midfield and making huge plays both on the attacking end and on the defensive end.”

The Mountain Hawks wrap up their road trip on Sunday with a visit to No. 22 Ohio State. Game time is set for noon with streaming video available on ESPN+.