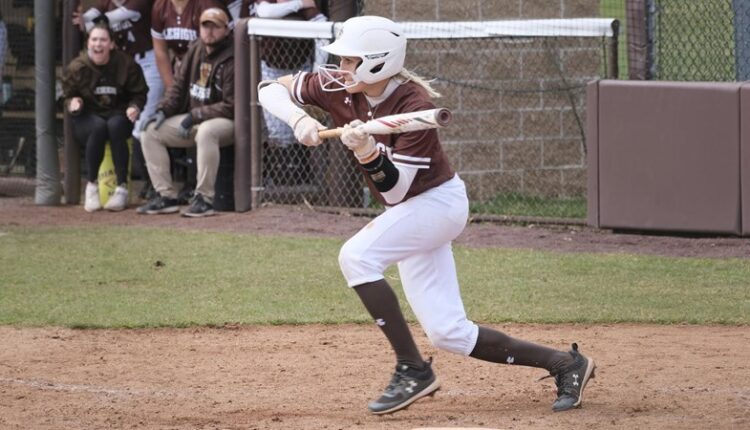 LEWISBURG, Pa. – The Lehigh softball team played two very different games Saturday against Bucknell, but the end results were the same as the Mountain Hawks swept a doubleheader at Becker Field. Lehigh lost a 7-0 lead in game one and then trailed 10-9 after six before rallying for an 11-10 victory. Game two was much crisper, with sophomore Katelyn Young tossing a three-hit shutout as the Mountain Hawks won 2-0 to sweep the twin bill.

Young earned the win in both ends of the doubleheader while senior Carley Barjaktarovich totaled six hits and scored three runs. Senior Addie Kittel finished the day with five hits and four runs batted in.

Lehigh’s bats came out of the gate hot in game one. Barjaktarovich and junior Emily Cimino both singled in the top of the first before senior Jaelynn Chesson drilled a three-run home run to center, her 11th of the season, to put Lehigh up 3-0. Kittel added an RBI double to left to cap a four run frame.

The Mountain Hawks scored single runs in the second, third and fourth innings to go up 7-0 before a six-run fourth inning brought Bucknell within a run. Makenzie Hilling hit a two-run home run and Sarah Baluch, Bella Radican and Annabella Hawkins all drove in runs.

A Chase Knapp RBI single tied the game at 7-7 after five innings.

Lehigh went back in front with two runs in the sixth on RBI singles by Kittel and Cimino but Bucknell turned the tide with three runs in the bottom of the frame, all of which came with two outs, to take a 10-9 lead. Nicole Rivait delivered the game-tying two run double and then Zoie Smith followed with a double of her own.

Sophomore Brooke Cannon started the seventh inning rally with a one out single and Lehigh proceeded to load the bases. Kittel singled to first base to bring home Cannon with the tying run and senior Karsen O’Rourke later scored the go-ahead run when junior Josie Charles grounded into a force play.

Jessie Kincer led off the bottom of the seventh with an infield single and senior Gabriella Nori re-entered in relief of Young to retire the next three Bison to save the Lehigh victory.

Nori allowed four runs on three hits in 4.1 innings of work with a walk and five strikeouts. Young allowed three runs on five hits in 1.2 innings but earned the win.

Barjaktarovich was 4-for-6 in the opener and Cannon and Kittel both added three hits.

In game two, Barjaktarovich led off with an infield single, stole second, and scored the game’s first run when Cimino doubled to left center in the top of the first. Kittel added her sixth home run of the season, leading off the sixth, for Lehigh’s only other run. The Mountain Hawks had 10 hits but left 10 runners on base.

Young scattered three hits and never allowed more than one Bison to reach base in an inning. She struck out four and walked two in her second complete game shutout of the season.

Saturday’s losses drop Bucknell to 5-36 overall and 1-13 in the league.

Lehigh and Bucknell will close out their series with a single game Sunday with game time set for noon from Becker Field.