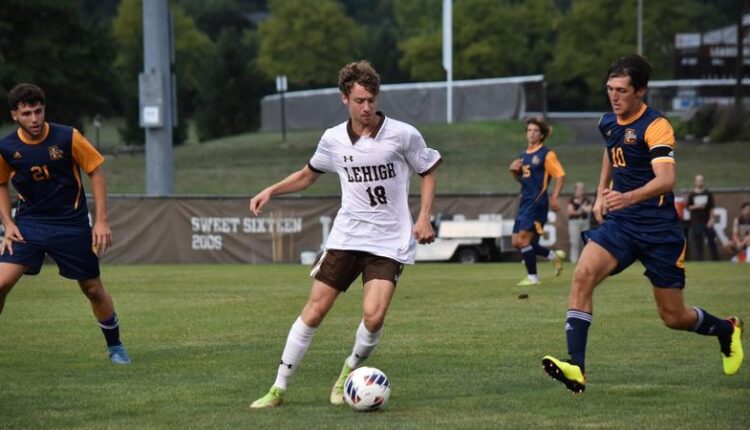 Lehigh Men’s Soccer Set to Visit Lafayette in The Rivalry

BETHLEHEM, Pa – The Lehigh men’s soccer team returns to action for the first time in a week against the Lafayette Leopards on Oct. 8 at 7 pm in Easton. The Rivalry will be broadcast on ESPN+.

The Mountain Hawks will look to get the best of the Leopards for the second straight year after defeating them 2-0 last year. Sophomore defender Yoni Aidlberg and senior forward Jack Sarkos were the lone goal-scorers in that match.

Sarkos continues to lead the way for Lehigh this season with seven goals and one assist. Aidlberg sits just behind him with two assists and one goal.

Lehigh leads the all-time series over Lafayette, 59-49-11. Each matchup has resulted in someone losing by a shutout since 2008. The last time the two teams tied was in a 2-2 double overtime game in 2008.

The Leopards come into the game having the better record this season. They are 7-3-1, while the Mountain Hawks are 2-5-2.

Lehigh is searching for its first win since Sept. 20 after most recently ending in a 2-2 tie against Holy Cross on Oct. 1.

Lafayette is coming off a 1-0 victory over Bucknell. Marcos Kitromilides, who leads the team with six goals on the year, recorded the only goal in the victory over the Bison on Oct. 1.

Senior goalie Alex Sutton is a major reason why the Leopards are sitting in third place in league play this year. Sutton currently has an .800 save percentage, recording his fifth shutout of the season last game, which lead him to be named Patriot League Goalkeeper of the Week.

Following Saturday’s game against Lafayette, Lehigh will head to West Virginia on Tuesday for a 7 pm showdown against the Mountaineers.

For the Houma People, Displacement Looms With Every Storm

If Pa. Republicans were serious about crime in Philly, they’d fight actually fight it | Marc Stier