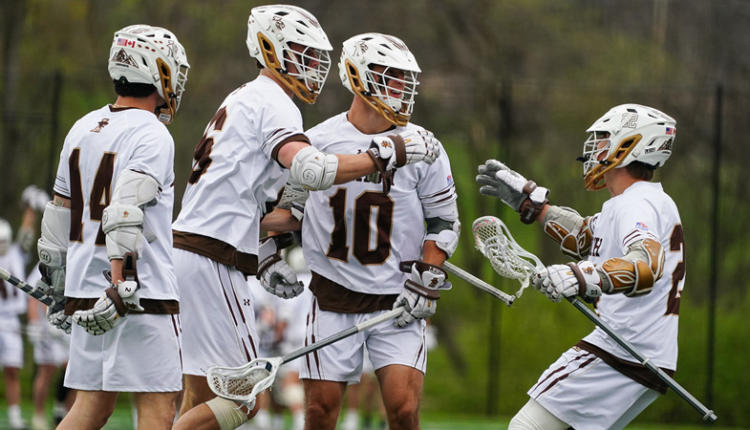 BETHLEHEM, Pa. – Following a pair of tight 9-8 defeats, the Lehigh men’s lacrosse team closes the regular season with a big matchup at Loyola on Friday with the No. 2 seed and a bye into the Patriot League Semifinals on the line. Gametime is set for 6 pm on CBS Sports Network. With a win, the Mountain Hawks would earn that coveted spot, while the Greyhounds need a win and Army loss at Boston University to finish No. 2 in the standings.

Lehigh is coming off a slim one-goal defeat against No. 15 Boston University. A back-and-forth game saw the Terriers use a 6-3 second quarter to take a 7-5 halftime lead. The second half was extremely defensive, with junior Christian Mule’ scoring his third of the day with 15 seconds left in the third quarter to pull within 7-6 after 45 minutes of play. BU opened an 8-6 lead, but the Mountain Hawks scored twice in the final 2:26 – at the 2:26 and 1:04 marks (by juniors Justin Tiernan and Mule’) – to even the score at eight. However, the Terriers’ Timmy Ley scored the game-winning goal with five seconds remaining for the 9-8 final.

The Mountain Hawks, Army and Loyola enter the final game tied for second at 5-2 (Boston University has clinched the No. 1 seed at 7-0). Lehigh needs a win on Friday to earn the all-important bye. The last time Lehigh and Loyola met, the Mountain Hawks picked up a 10-6 win in the 2021 regular season. The teams were set to play in the championship game, but it was canceled due to a positive COVID-19 test.

Loyola stands 6-7 on the season, 5-2 in Patriot League play. The Greyhounds responded from two straight losses with an 11-10 overtime win at Colgate this past Saturday. Evan James scored the game’s final three goals – with 3:05 and 0:39 remaining – to pull even, then with 1:55 left in overtime. Aidan Olmstead leads Loyola in assists (30) and points (48) – including an assist on the overtime winner Saturday. Kevin Lindley leads the Greyhounds in goals (28) and is second in points (32). Payton Rezanka leads Loyola in caused turnovers (24). Bailey Savio leads the Greyhounds in groundballs (95) and has won 52.3 percent of his faceoffs (151-of-286). In goal, Sam Shafer owns an 11.76 goals against average and 48.7 save percentage.

Loyola leads the all-time series against Lehigh, 15-1. The Greyhounds won the first 15 meetings before the Mountain Hawks’ first victory last March at home. The first-ever meeting was 1942, a 12-1 Loyola victory. The teams have played nine times since Loyola joined the league in 2014.

Montana Hires a Medicaid Director With a Managed-Care Past