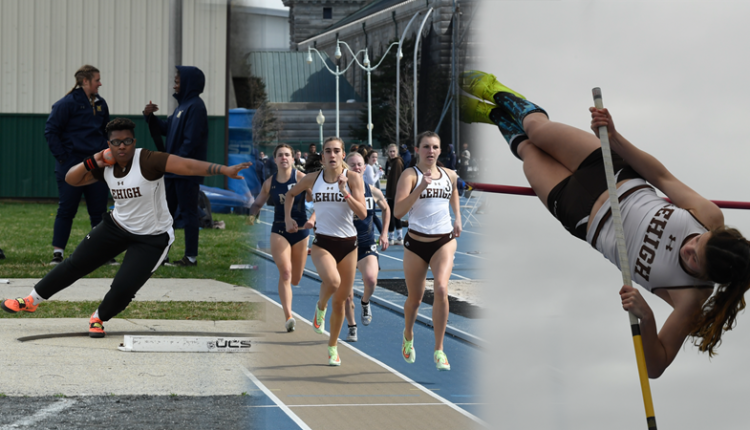 ]BETHLEHEM, Pa. – The Lehigh women’s track and field team will head to Easton, Pa. to battle Lafayette on Saturday. The much anticipated dual meet will begin at 11:30 am with the men’s pole vault and women’s hammer throw kicking things off. Action on the track will begin at 12:45 pm with the women’s 4×100 relay.

The Mountain Hawks are coming off a 113-68 win over Lafayette in late January and are hoping to go 2-0 against the Leopards this year. Lehigh is having a solid outdoor season so far, tallying 11 PRs and six top 10 additions through two weekends of competition.

Lehigh’s distance group has put up solid times over the last two weekends of competition. At the Raleigh Relays, senior Jamie Zamrin secured a new PR in the 10k, finishing with a time of 35:55.02. Zamrin is now third all-time in Lehigh history.

Seniors Jade Sessions, Julia Dorley, Kara Bonner and Hetty McMillan all found success at both the Raleigh Relays and Navy Invitational last weekend. All four seniors finished the 1500m with PRs at NC State. Sessions and McMillan were the top finishers for Lehigh, finishing with respective times of 4:30.38 and 4:31.76. The duo are now fourth and fifth all-time. Bonner and Dorley followed suit, finishing with respective times of 4:34.18 and 4:38.85.

On the sprints side, the Mountain Hawks continued to finish races with solid times. First-year Melissa Cunningham and sophomore Jordyn Hock finished the Navy Invitational with top finishes. Cunningham finished second in the 100m with a time of 12.28 to become fourth all-time. Hock competed in three races in Annapolis, securing a first-place finish in the 4×400 relay, second-place finish in the 200m (25.74) and third in the 400m (58.39).

Lehigh’s jumps group continued to build on the success they had during the indoor season. First-year Casey Talamini-Kelemen led the way for the Mountain Hawks in Annapolis. Talamini-Kelemen finished second in the triple jump (11.49m) and seventh in the pole vault (3.12m) in her first outdoor meet. Fellow first-year Keisha Modi also finished second in the long jump with a mark of 5.47m.

Sophomore Kerry Perna secured a first-place finish for Lehigh in the high jump on Saturday. Perna finished with a mark of 1.60m, tying with Bucknell’s Karen Hull.

The Lehigh-Lafayette Dual Meet Schedule can be found at the top of the page. Live results will be available the day of the meet. Check back on Saturday for results and a full recap.

Cult, Religion, or Simply a Fandom: Do Disney Adults Worship The Mouse?